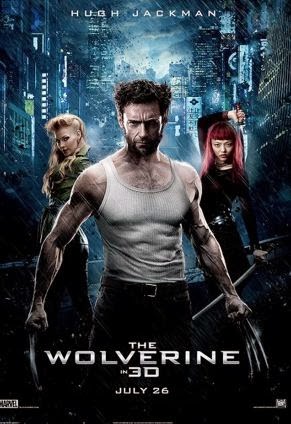 I've been a fan of the X-Men films since the original back in 2000. Thirteen years later we now have the latest movie featuring Wolverine. While the Origins movie was about Logan's past, this one is about his future after the events of The Last Stand.

The plot starts with Logan living as a hermit in Yukon, Canada. He is tormented by the loss of his beloved Jean Grey, and with Professor Xavier's death he no longer stays at the Xavier Institute school. Despite being isolated, he is found by woman named Yukio who requests that he travel to Japan with her.

He learns that she's been sent by a man named Yashida who met Logan during World War II when (thanks to Logan's mutant abilities) he saved his life in Nagasaki. In gratitude, Yahsida offers Logan a chance to become mortal (as he heals too fast and never ages) and live a normal peaceful life. He refuses and Yashida passes away shortly afterwards. During his funeral, his grand-daughter is almost captured by Yakuza and the Wolverine (Logan) returns from super-hero retirement to save her.

Overall I really enjoyed The Wolverine film. It focuses more on what makes Logan awesome, and doesn't ruin some of the heroes or villains like some previous movies did. My favorite of the series is First Class but The Wolverine is about par to the first two films.
Posted by Adam at 3:00 PM

I should check into this. I've heard so much about it.

I enjoyed it too! Love Wolverine! Although in that one scene with the ninja archers, he should have changed his name to Porcupine!

Hey Adam- You had me at WOLVERINE. (LOL)

Another movie I need to catch up on!

Glad it is better than X3

Way better than x3 and origins

Not much of X-Men and wolverine fan :(

This sounds like loads of fun. I didn't know it was in Japan. I'll check Redbox.