Fact of the Day: Cromwell Drama 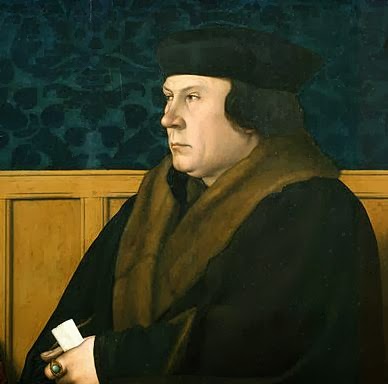 Thomas Cromwell was King Henry VIII's chief minister, but he became an enemy of the King after he arranged Henry's marriage to the German princess Anne of Cleves. The marriage did not last, and Cromwell saw an early demise because of it. Ironically for the royal family, his great-great-great nephew Oliver Cromwell abolished the monarchy until Charles II became King after Oliver's son Richard lost power.
Posted by Adam at 12:00 AM

Oh no, I'm sorry to hear that about your dentist appointment!

But I love how history is evolving sometimes :D

Did the King kill Cromwell because of it?

I was obsessed with Oliver Cromwell when I was a kid. Yeah, that's how big a history nerd I was, LOL!

never do dirty business for kings... that is my motto

pretty much, then regretted it and tried to blame it on someone else.

I know very well this character; I have seen the Tudors, the series. Kisses:)

absolutely interest but you know how the kings are!

Hi :) I'm Iwona and I am a blogger and illustrator :) I just found your blog, which is interesting and cute:) I really like it :) I would like to show you my blog and my illustrations and If you get a second, I' d love to hear your thoughts on topic my illustrations and blog:) I greet:)

The way of an Englishness, it is vile.

He looks ticked off, I'd be too if the king was going to kill me though

It stinks that he was blamed for their bad marriage but I guess his descendant got some justice for him in the end.

I din't knew that... Lucy www.tpinkcarpet.com

Always an interesting history lesson on your blog!

Love to hear these little history lessons. You always keep it interesting Adam!!

Hm, that's interesting! You always suprise
me with these facts :)

The king was a real jerk. Maybe he should have looked in the mirror if he wanted to blame someone for his marriage falling apart.