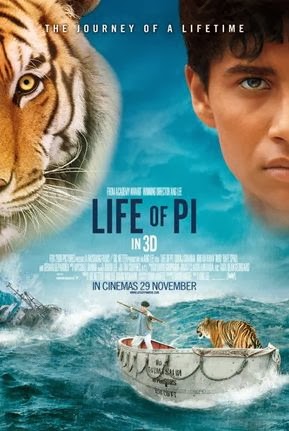 Life of Pi is something I've been meaning to watch for awhile now. It did so well critically that many thought it was possible it would win an Oscar. Though the only thing I knew about the story was a young man sharing a boat with a tiger. Not exactly a thrilling plot from that limited perspective but the story is obviously way more than that. 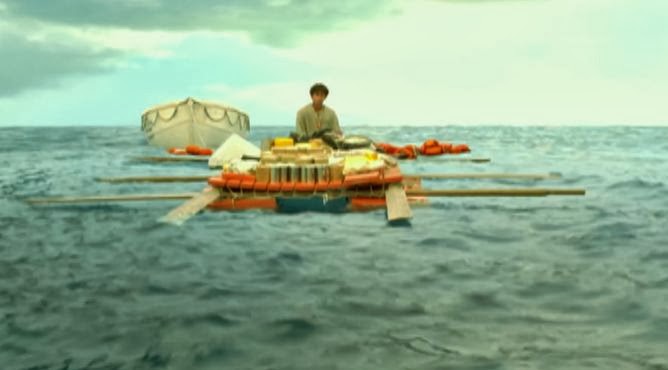 The plot begins with the early life of a man named Pi who was born and raised in India. His father has run a zoo for many years but one day decides to move to Canada. The whole family travels by boat, but it sinks in a terrible storm. Pi manages to find a lifeboat and survives with his family not being as fortunate. 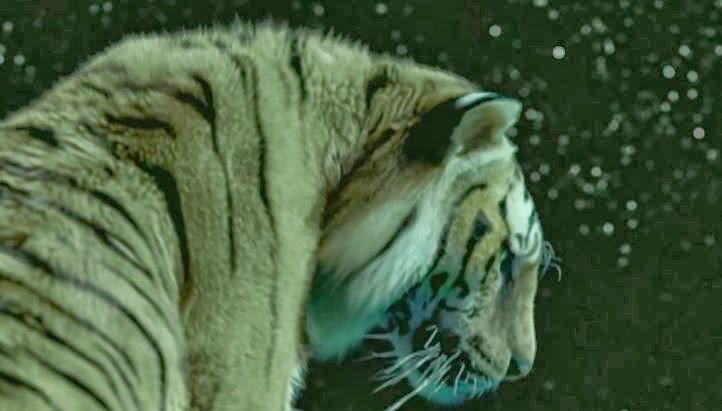 During the storm, a Bengal Tiger named Richard Parker (a funny nickname from the zoo) manages to climb into the boat. While Pi is scared of the tiger, he manages to find a way to keep a safe distance and to make sure the tiger can survive with the little bit of food and fresh water they can get. With the days seeming endless, both Pi and Richard Parker do their best to survive while they hope to be rescued.

Overall I can very well see now why it achieved such critical acclaim. The story is brilliant and the visual effects are often gloriously beautiful. It also discusses the issue of religion, where Pi strangely follows three different faiths simultaneously but with one love for God. While I assume it was the author of the original book's intention to make a case for deism, I found the story also shows human tendency to prefer fact mixed with fiction to bear the burden of a grim reality.
Posted by Adam at 3:00 PM

Thank you for this review
Moscow blogger by Marina Maximova
http://afinaskaterblogspotcom.blogspot.ru/

Stay in touch with me on BLOGLOVIN

I saw and enjoyed this movie awhile back, maybe I didn't get it all. Good cinematography.

I've not seen this either yet but the story always sounds so intriguing and friends of mine have loved it!

Very good review. I read the book first, and then watched the movie. I loved both very much! The book is much more interesting because it's more detailed, but the movie was extremely well made.

The book is fabulous too and has some very good discussions of religion and spirituality.

I passed on this one because my kids said it was really boring. I may have to rethink it and give it a go sometime.

Hey, I got your comment. How come you haven't used the waffle iron yet?

I loved the movie but I didn't know what to make of the ending. The person I watched it with seemed to think the tiger was a figment of his imagination the entire time, whereas I believed it happened. What did you think?

I haven't seen this one because when I saw the trailer the story didn't "catch" me but if you say there is something more than a tiger and a man in a boat...I should give a chance. Kisses:)

I must see it. This movie looks fabulous by it design :)

Spoiler alert: The book explains it better (I read the summary), it becomes obvious that Pi was the tiger, the zebra was a sailor with a broken leg, the hyena was the angry cook, and his mother was the orangutan.

Oh wow. Now that makes me want to watch the movie again to see all the hidden clues.

We thought the visual effects were incredible. We took my mom who doesn't really understand English too well, but she loved it!