My Thoughts on the Bill Nye vs. Ken Ham Science Debate 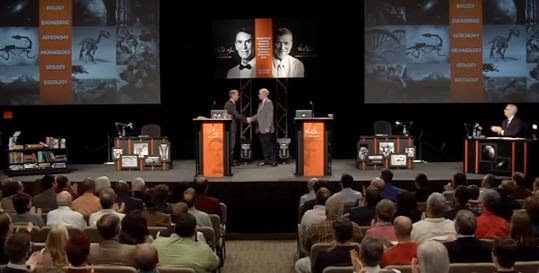 Back in 2012, The Creation Museum in Kentucky (a place that features a dinosaur statue with a horse-like saddle) got on Bill Nye The Science Guy's last nerve and Nye publicly expressed his disgust on how the belief of a young-earth biblical creation stunts our scientific growth especially for the younger generations.  The Museum and its leader Ken Ham responded back, and now in 2014 (two nights ago actually) we got a formal debate between the two men. 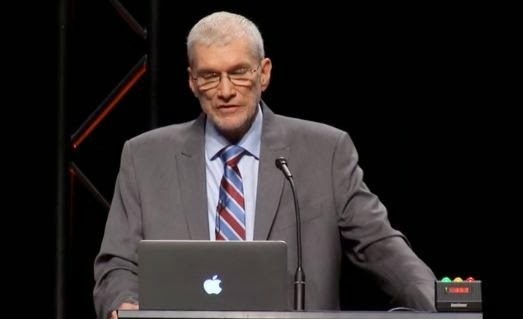 Young Earth Creationist (the belief of a 6000 year old Earth) Ken Ham got to speak his point first, but the one thing he really tries to stress is that some scientists are young-earth creationists; such as Danny Faulkner
and Raymond Vahan Damadian. Danny Faulkner's field is astronomy and claimed that there is nothing in the universe (with no reasoning to back it up) to disprove a young Earth. Anybody who knows anything about the distance of planets/galaxies and the speed it takes for light to travel to and from already proves that the Earth is way older than 6000 or even millions of years beyond a shadow of a doubt. 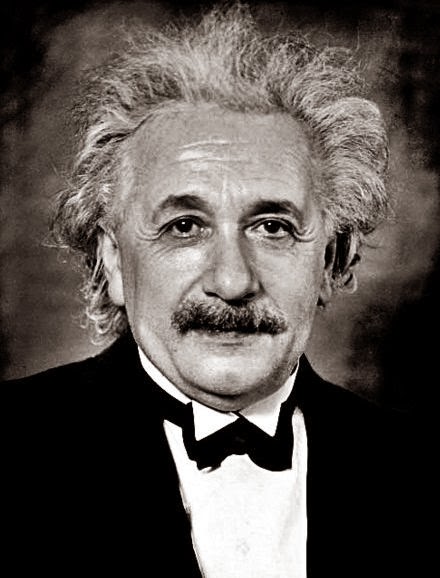 Raymond Damadian also created the first machine that we today call the MRI, but despite this achievement he thinks a talking snake tricked a rib-woman into eating an apple literally happened 6000 years ago. While Ham tries to make a point that even creationists can go on to do great things in science, it still doesn't give any legitimacy to creationism. Many great scientists had some strange habits or beliefs. Albert Einstein married his cousin, Nikola Tesla fell in love with a pigeon, Alexander Graham Bell thought the moon had harmful rays, and Henry Cavendish was so very shy that he didn't spend much time around anyone.

I heard of a lot of creationist ideas before, but this one might be the newest one I've heard from Ham. To explain the diversity in many animals (especially dogs), he claims that God created different "kinds" of animals. If I remember him saying this right, he said that their gene pool is so complex that new traits and species come from no new genes. But if this was so then why haven't we seen a purebred Golden Labrador give birth to a Siberian Husky? New traits come up because of mutations, dogs in particular were artificially selected by people for traits they personally liked in a dog. 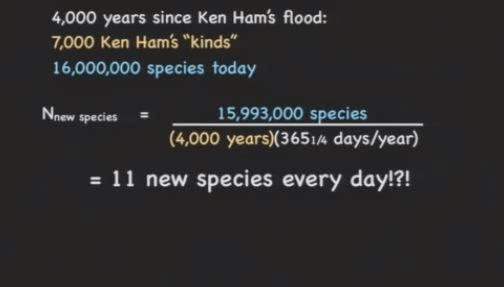 All species in truth evolved from a common ancestor. Small changes little by little over millions and millions of years has led to life on Earth as we know it. But while Ham's idea is not only scientifically impossible, Nye showed it didn't hold up well with math either. With 7,000 kinds of animals since Ham's idea of biblical creation, 11 new species would have to appear out of these kinds every single day for the next 4000 years. 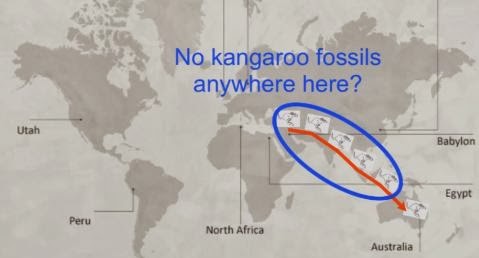 Nye also points out that certain animals such as a kangaroo have only lived in Australia, as we have never found a kangaroo fossil in the Middle East. I remember some creationist explanation that man spread all the animals across the world. The logic in this is also hilariously awful. In North America for example, Columbus brought the first horses to the continent. Why would someone choose to bring a black widow spider with them instead of a horse? 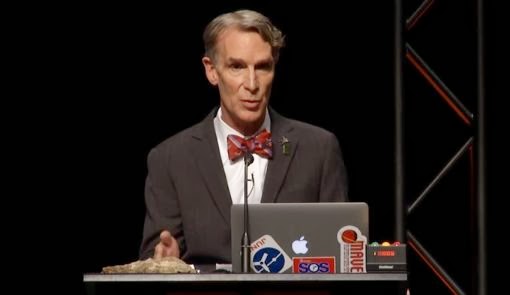 I really wished Nye had been a little more on the offense especially on the topic of theology. Ken Ham used rather bizarre philosophy to question almost the reality of science as we know it, but Nye never really criticized any story in Genesis except Noah's Ark and Adam and Eve. During one part of the debate, an audience member asked Nye what the second law of thermodynamics was in hopes that he wouldn't know to make him look like a fool. Ironically even though this debate is on the subject of biology, Nye actually has a degree in Engineering so he actually knew a lot about it. 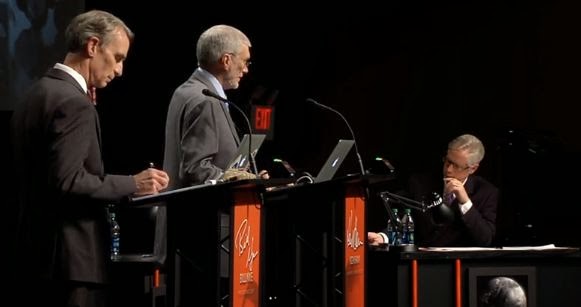 While there was a lot more discussed, I thought Nye did a good job. Ken Ham definitely seems to have a lot experience in debate, but outside of his rehearsed presentation he mainly got stuck into "I believe what's in the Bible" defense during questions and points. To finish my statements, ironically the most ridiculous thing Ham said all night had to do with religion. Claiming there is no other book in the world like the Bible. Uh virtually every religion has a creation myth, and the concept of a heaven and a dark underworld. Also Islam's holy book the Quran features the story of Adam, Abraham, Noah, and even Jesus just with little to many differences to how they are in the Bible.
Posted by Adam at 9:12 PM

Bill Nye realized that he was talking to an idiot, so he was more focused on trying to get children who may have been in the audience to have an interest in science.

Oh and make Mr. Ham look like an idiot.

Ham is a moron, plain and simple

Interesting Adam, you know a lot about the creation myths. Unreal debate.


Of course, since I have only watched the Network News (a.k.a. Religious Authority approved Skippy Goebbels) report, I don't have that much info. I will not watch the entire debate until I'm gettin' as much money and/or publicity as Nye & Ham got.

However, for Bill Nye to represent an Atheist POV...well.....I ain't viewed anything like that since Neville Chamberlin got back from Berlin.

You don't get on PBS without being Religious Authority approved, TOO!

Sounds like an interesting debate. I really like Bill Nye, and I've always enjoyed science. Seems like you do, as well, and that you are quite knowledgeable.