I had heard of American Hustle last year but never got to see it in theaters. While the film did very well critically, I also wanted to see it because the main cast have had notable roles in super-hero movies. Christian Bale was Batman, Amy Adams was Lois Lane, Jennifer Lawrence was Mystique, Jeremy Renner was Hawkeye, and Bradley Cooper will have a voice-only role later this year in Guardians of the Galaxy.

The story begins with the unique life of a man named Irving Rosenfeld. He is a clever liar and uses this as an advantage for most of the aspects of his life. The only real noble thing about Irving is the strong-bond with his adopted son. Irving meets a woman named Sydney, who is practically his equal and uses a fake English accent to help Irving fool gullible people.

However they make a mistake and land in trouble with government agent Richard DiMaso. DiMaso admires their talented people skills, and offers them freedom if they help him in a bigger plan. DiMaso hopes to make a name for himself by going after bigger fish, which goes all the way to members of Congress. 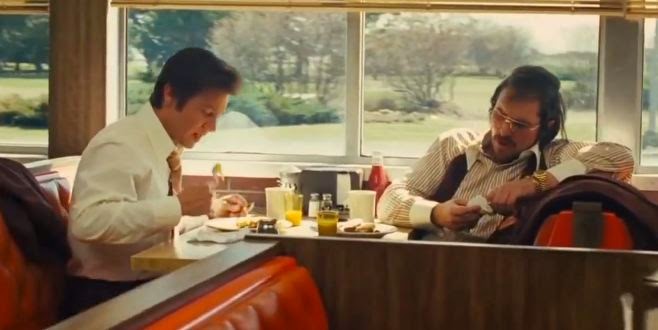 Overall I loved the film, and could see why it was nominated for an Oscar. I think Amy Adams was marvelous as Sydney, but I also really liked the characters played by Bale, Renner, and Lawrence. I also liked that it's based on actual events from the 1980s, but with a lot of creative freedom so they don't have to worry about historical inaccuracies.
Posted by Adam at 5:00 PM

Like you I thought this movie had great acting but ultimately I found this movie as boring as it was confusing.

I enjoyed it to

I can't wait to see this one! I do love most of the actors that are in it!

Seems a film I should watch:)

Alexandra | As Seen by Alex said...

I really want to see the movie!

This was the movie I saw last night (I had nothing to do
or TV shows to see) and it's so clever... I was glued on the couch all the time! :D
I loved the character played by Jennifer Lawrence, she was like I've seen her during interviews: smart and adorably crazy.
Have a great new week and I'm happy to had a nice bday.