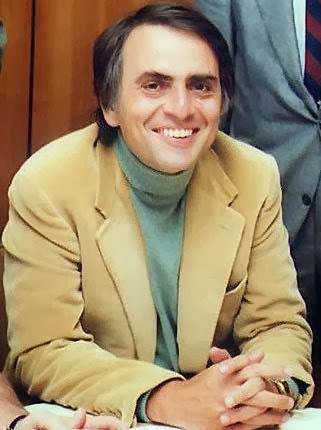 When Bill Nye The Science Guy was a student at Cornell University, one of his professors was the legendary astronomer Carl Sagan. Bill Nye later became CEO of The Planetary Society, an organization that Sagan was a co-founder whose mission is "to inspire the people of Earth to explore other worlds, understand our own, and seek life elsewhere."
Posted by Adam at 8:28 AM

But what if the aliens are already here, then it be easier as they are near.

this is the first time I hear of him

That's so cool. I remember reading one of Carl Sagan's books in college. I think it was called 'Cosmos'

Carl Sagan influenced a lot of people and turned them on to science and astronomy.

You teach us so much. Great learning lessons.

I remember watching Bill Nye when I was a kid. Interesting fact!

That's so cool to know!

Oh to have had Carl Sagan as a professor! I love Carl Sagan! And I love Bill Nye too ~ I used his videos a lot when I was teaching science to my third graders. I'm sure you know that a new Cosmos series is coming out in a few days. Sagan's wife is one of the producers. The presenter will be Neil deGrasse Tyson, another favorite scientist of mine! I hope that you are enjoying your week!

Can't but admire these guys!

First I've heard of him too

I loved Bill Nye when I was a kid. Too bad they don't make fun and educational shows like that anymore!

Hi, Adam...I've never heard of Mr. Nye but probably because I am olden and just not in the loop anymore. :(
Have a great week...
xo bj

I thought he looked awfully familiar.

Yes I am looking forward to it, in astronomy Neil deGrasse Tyson seems to be Sagan's unofficial successor

He inspired a generation!

This is really interesting Adam and never heard about this guy before!