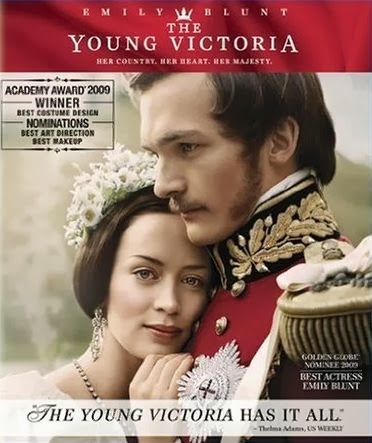 As many of you know I'm a big fan of history. Especially American and European history from the 19th-20th century. Queen Victoria is one of Great Britain's most notable monarchs but I always picture her in her elderly age. When I heard about the film The Young Victoria, I figured it would be interesting because I don't know terribly much about her first years as Queen.

The story begins with Victoria still a mere princess. She already knows that she is heir to the throne when her uncle eventually passes away. Though things are not terribly perfect for Victoria. Her father died when she was young, and she doesn't have the greatest mother either. Her father-like figure John Conroy hopes that Victoria (who he tries to control) will become Queen when she is still young as she will need a regent. Meaning Conroy will have considerable power if her mother rules in her place since she follows his orders. 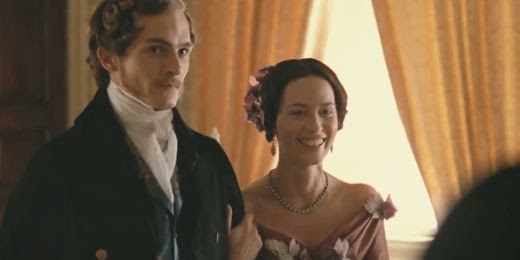 Victoria becomes Queen without needing a regent though she isn't totally free from Conroy or her mother yet. She makes mistakes such a favoring certain politicians above others, and putting too much trust in some people. She also meets her future-husband Albert who desperately wants to be with her.

Overall I wouldn't say the film is bad, but it did become rather boring. I also looked up some parts of history I didn't know and the movie has quite the number of historical inaccuracies. Even Victoria's great-great-granddaughter Elizabeth II commented negatively about it. One of the reasons why I ironically hate a lot historical films is that it's hard for me to forgive even the most minor changes of history.
Posted by Adam at 4:00 PM

Yes, the part about Albert being shot to protect Victoria is mostly fiction. Unfortunately, Victoria jettisoned all of Albert's progressive beliefs after he died and settled for an empire based on force rather than commerce and mutual benefit.

No la he visto!!!
Saludos
http://judithbysucre.blogspot.com.es/

I did not recognize Emily Blunt !
This movie looks interessant but may be boring as you said it.

I bought a copy of this movie for my sister for Christmas a couple of years ago but I still haven't seen it. Have you seen the movie about Victoria in her widowhood -- "Mrs Brown" with Judy Dench and Billy Connolly? I thought that was quite good. No historical movie is ever going to be 100% historically accurate though -- the demands of drama will always win out.

I haven't seen this yet. Debra is right ~ the demands of drama will top the need for accuracy. I need another lifetime just to see all the movies I still want to see!

Thanks for pointing out this historical classic.

Too bad that it isn't more accurate.

I only made it a quarter of the way through this one before I thought my brain was going to fall out from the boredom.

Haven't seen this film yet. I guess some people like it and some don't.

So much of history gets changed when it goes to the box office to make it more titillating. Still, I enjoyed Victoria as a movie... sort of.

seems like a great movie, i'm not a big fan of historical movie but this is looks interesting!

Keep up the history!

This is one of my favourite love stories. Great film. Kisses:)

I loved the film and the perfomances of Emily Blunt and Rupert Friend were outstanding and mindblowing! They had such brilliant chemistry together as well

I agree, Adam...so many films aren't true to life...guess they try to make it all more interesting in the movie..