Darth Vader was so legendary in the original movies that when the prequel movies began they needed a Sith lord to at least compare to him. While we didn't know much about Darth Maul's story from Star Wars Episode I: The Phantom Menace alone, he was pretty cool. Having a double-bladed light-saber was also really neat. 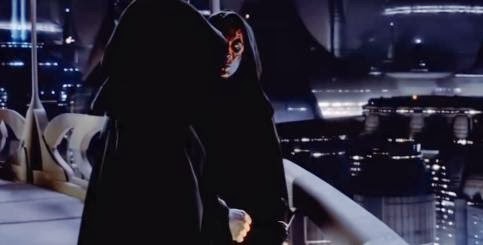 Despite that he was no push-over. His first real battle we see is against Jedi Master Qui Gon Jinn in a surprise attack right before they leave Tatooine. Jinn manages to jump into the ship before the battle could be finished.

Maul would later face both Jinn and his padawan Obi-Wan Kenobi at the same time. The battle was one of the few truly awesome things about Phantom Menace. I really like the tension of the scene where Obi-Wan falls a bit behind and is temporarily separated from the battle.

Then watches Maul land a mortal wound to his Jedi teacher, and faces the Sith alone. Maul always seemed to have the upper-hand, even able to kick Kenobi's lightsaber down to the abyss.

But thanks to surprise move using Jinn's lightsaber, Kenobi defeats Maul. While I really like Darth Maul, a recent rumor says he might return (most likely using a clone) in the new trilogy set after Return of the Jedi. I'd rather see him not return, as I feel the new trilogy should feature original villains we haven't seen.
Posted by Adam at 3:30 PM

Thanks for leaving such a darling comment on my blog!

I am a Star Wars addict ! I really love your post Adam.
Have a great week ! ;)

I liked Darth Maul and was disappointed that he died as quickly as he did. That being said, no way do I want to see him come back as a clone. I still haven't gotten over the return of Spock from the dead.

I am super excited for the new trilogy coming out in 2015!!

I LOVED the Star Wars movies...saw them with grandkids and we always had such fun.
I can't remember Darth Maul...wonder why...? I loved Darth Vader....
(and, *shhhh....I am STILL in love with Harrison Ford...) hahhhaaa....