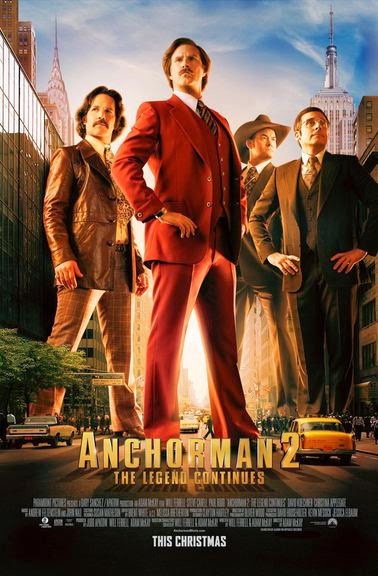 I really thought the original Anchorman movie was pretty funny. I'm also a little shocked to realize it's been almost a decade since the film came out. My mom usually calls anything Will Ferrell does (except Elf) "stupid" but she admitted to enjoying the original. If that's not a compliment, I don't know what is.

Since it has been many years since the first movie in reality, the plot is set about a decade later in the 1980s. Ron Burgundy and Veronica Corningstone are now married with a son, and work at a news station in New York City. After Ron loses his job, he can't keep control of his emotions and leaves Veronica.

At the worst point in his life, Ron gets a second chance. He is offered a role at a new station, and gets his old pals from San Diego to work as a team again. Despite some great challenges, they are quite successful. Still no matter how respected Burgundy is as an anchorman, can he regain the respect of his wife and son?

Overall Anchorman 2 is just as good if not better than the original. It's hilarious and absolutely stupid, and that's the way it should be. I also forgot how hysterical Steve Carell's character Brick Tamland was. It's one of Will Ferrell's best movies.
Posted by Adam at 4:00 PM

I loved loved loved the first one, and can't wait to see this. I'm hoping it'll be on Netflix soon. We're big Will Ferrell fans over here, and I heard that he's super nice in real life too:)

I don't believe I sat through the whole first movie. Glad to know the second one is better.

I think I am right there with your mom on thinking he is stupid, expect for Elf. I did not enjoy the first, and if my husband even tries to bring home the second, he can watch it alone.

I haven't seen the first movie, I'm just not into comedies. So I doubt I'll see the second one either.

Will Ferrell is no John Candy or Steve Martins. Other than that it's all good. ;)

I don't know what it is but Will Farrell just doesn't make me laugh.

The well-written updated story as well as the maintained authenticity of the returning characters help  make for a sequel that's endearing and laugh-out-loud funny.