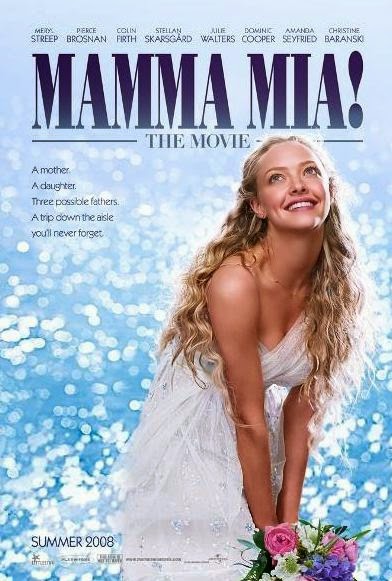 I honestly never heard of Mamma Mia back in 2008. However Daisy and I really adore Amanda Seyfried, so eventually we had to see it. I really enjoyed Seyfried as Cosette in Les Miserables which like Mamma Mia is a musical-film based on a stage-musical. However unlike Les Miserables, Mamma Mia was never a novel. 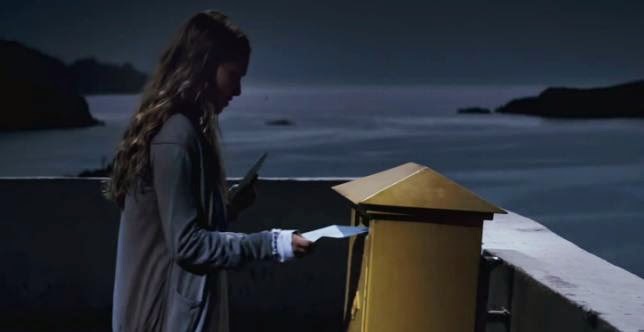 The story begins with a young woman named Sophie who's about to be married. She never knew who her father was, but found her mom's old diary from just before she was born. Despite the diary, she is still unsure who her father is. But knows it must be one of her mom's three ex-boyfriends of that year. Acting alone, she invites all three of them to her wedding, with them thinking that her mother wanted them to be there. 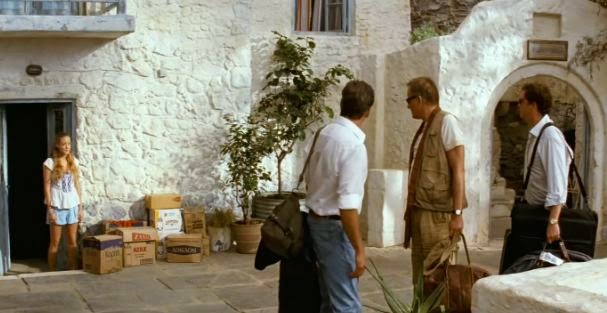 Sophie is practically sure she will know who her father is as soon as she sees him with her own eyes. However when her "dads" arrive, she is clueless. To make things worse, her mom doesn't have a clue that were coming and literally flips out when she sees them. 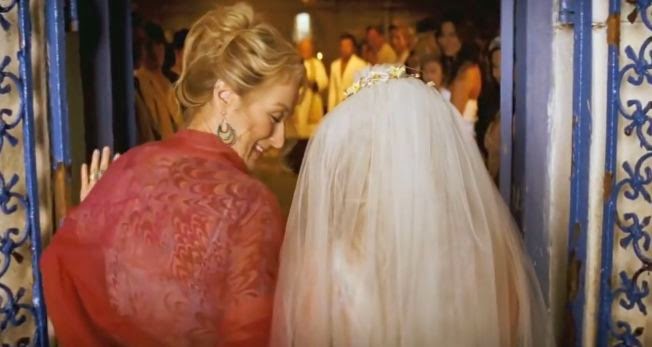 Overall I thought Mamma Mia would at least hold a candle to Seyfried's other musical film Les Miserables, but it doesn't come close. I thought Seyfried and a lot of others sung wonderful, but there are some actors (especially Pierce Brosnan) that I felt didn't really fit well in a musical at all. All the songs in the movie are from the band ABBA, and while ABBA is a well respected musical group I thought having no unique songs really hurt the originality of Mamma Mia. While I enjoyed the story, it didn't live up to my expectations.
Posted by Adam at 3:00 PM

Yeah once I heard it was all Abba songs, avoided it

This is my favourite one . Love Meryl Streep and all Abba songs :D

Maybe it is more girlie :) I loved the music

Didn't like the movie but saw the musical in Las vegas and that was fun.

I actually saw the musical live, and I must admit that I loved the live musical version but not the movie. Meryl Streep was the only one I really loved in it. As much as I love the actors, I thought they were not right for the roles:(

I did see the Stage play and enjoyed it.

I like ABBA, but Pierce Brosnan singing? Good Lord.

A few of the songs were good but ultimately I didn't care for it too much.

I love ABBA's music so I enjoyed this musical. All except for Pierce Brosnan who can't sing worth a damn. They should not have cast him in this movie.

I actually liked this one a lot. I tried to watch Les Mis the other day, and it failed to hold my attention. I only got through 20 minutes before I turned it off.

Haven't seen the movie of the musical.
One day I will see the movie.

I tend to say, "Mamma Mia!" whenever I see Amanda Seyfried. Strange, right?

I really liked this musical-film when I saw it. It is very funny and I love Colin Firth. Kisses:)

I love this movie and the songs:)