Fact of the Day: George Religion 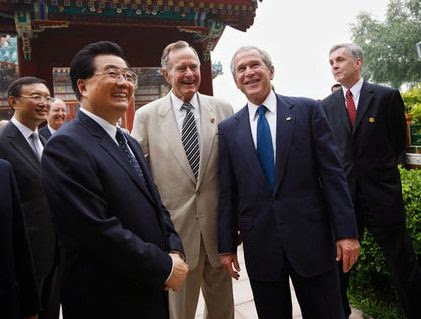 While ironically considered more evangelical than his father, George W. Bush had kinder words than his dad for non-religious Americans. In 1987 a journalist described a conversation in which George H.W. Bush thought that non-religious Americans shouldn't be considered patriotic or even citizens. In 2004, George W. Bush said "I will be your president regardless of your faith... And if they choose not to worship, they're just as patriotic as your neighbor."
Posted by Adam at 12:00 AM

I can't actually believed he said that in the 80s...religion and state shouldn't mix, it's discriminating to everyone with a different faith or to those who chose not to believe in something like that.

Religion is a personal choice. It has nothing to do with being patriotic.

What an odd thing for George Snr. to say.

I agree with Martha, "Religion is a personal choice. It has nothing to do with being patriotic."

That is very true of what he said, it shouldn't make any difference.

Shouldn't make a difference at all, Bush senior got the moron statement of the year there

It's always the religious ones who are the most judgmental like that. I wasn't old enough to vote for him at the time, but that would have sealed the deal for me to vote against him.

Some of the nicest people I have ever met have been non-religious, and non-judgmental to those who practice their religion in their own way, no matter what religion they follow.

I notice that a concentrated effort is currently being made to rehabilitate the memory of George W. Bush. It will take a while for me to come round and forget about the phony wars he launched.

Religion is peronnal choice, there is a big difference with the patriotism...

My oh My how one's tune changes when they're running for office eh?