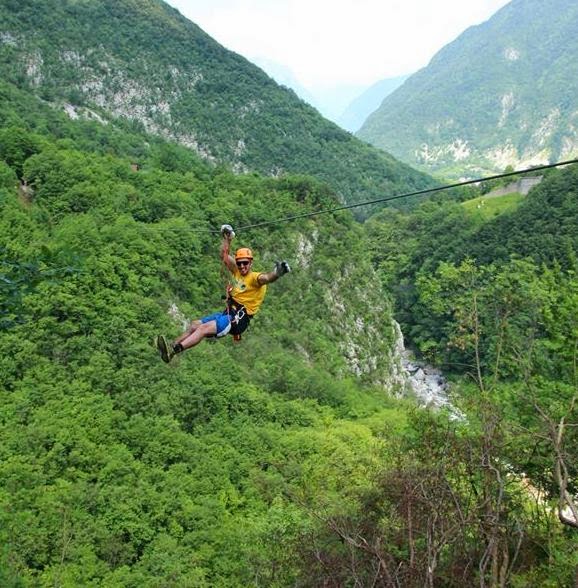 When I was about eight my mom took us to a Methodist Church which had a summer camp. It wasn't really their summer camp, but I'm pretty sure it was a place called Lake Junaluska up in North Carolina. When I was about ten or so I went with my brother and they had the typical stuff you'd expect from a summer camp. Such as swimming, crafts, paddle-boats, and even a zip-line which is almost like a ride that takes you from one distance to another really high up in the air.


Seeing such a height before I was even a teenager was a bit too much. Some of the other people there were more than eager to go across. They even let the stronger swimmers fall off the zipline and dive into the lake. I waited my turn and they got me set-up. I looked across the lake at such a height, and didn't move at all. I was too scared to go. If given a second chance, I would love to overcome my childhood fear.
Posted by Adam at 3:00 PM

Oh, I wouldn't have done it either! I am terrified of heights! You could always try again, maybe in a more relaxed situation without all the peer pressure.

I also like zip lining, we did it in St. Lucia.

I think it best you leave that experience to others. No way would I do it, young or not. I cannot hardly get two feet off the ground until I get dizzy.

I did a zip-line in Maui, which is VERY unlike my non-athletic self. We had to do a number of runs over various lines and I froze too on one platform in particular. So the zip-line guy simply hoisted up the line until my feet were in the air and off I went! At least he didn't kick me off the platform, LOL.

Not sure I would have done it then. But I'd do it now

You can do it, Adam! I would love to try something like this someday:)

I'd love to do this but at my weight I'd probably snap the cable.

you have to try it again!!
big kiss!

I hope you get another chance. I'm not sure if I can do it. I'm not a fan of heights.

I hope you can have the time and chance to make this again!
xx

I'm afraid of heights so I know I will never be ziplining.

I am terrified of heights. I probably would have done it at a younger age, but I'd probably wet myself if asked to do it now.

I think I would have done it back then but not now ;) I seem to have been more fearless as a child :)

I have a fear of heights so I am not sure if I would have done it. Likely not.

I enjoyed very much the only time I did "zip line" with my children . It was very, very exciting and funny. Kisses:)

I have done zip lining for the first time (and only so far) in Jan this year. I was hell of a chicken, but I dont regret a moment! Such a amazing experience :)

you can do it! maybe you and daisy could do something like that on your honeymoon or another vacation trip.