The Hobbit: The Desolation of Smaug (2013 Film) Review 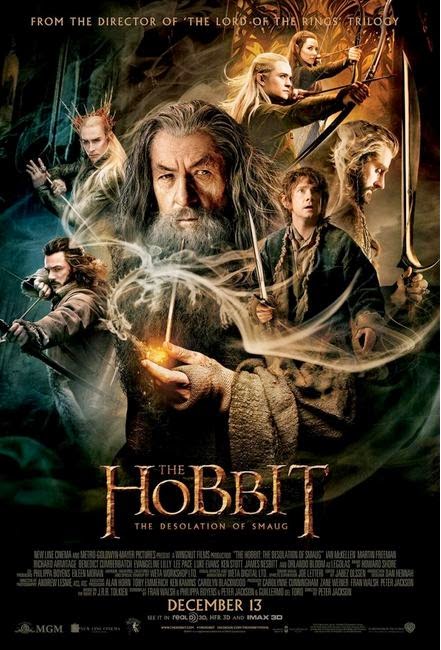 I was a big fan of The Lord of the Rings movies, but I still wish they hadn't split The Hobbit into a trilogy. Two movies would of been a good idea, but the first one An Unexpected Journey certainly had a lot stuff that wasn't in the book. I was glad to finally watch The Desolation of Smaug as they finally reach the mountain and see the mighty dragon.

The film begins right after the first with Bilbo and the Dwarves very close to Lonely Mountain. Gandalf leaves his friends to investigate the evil nature of the Necromancer. Without the wizard they enter the town of Dale which is their only way to the mountain.

With orcs after them, Bilbo and his friends must make it to the castle and inside it to find the Arkenstone. However the fearsome dragon Smaug is still alive and guards the castle. Their greatest challenge begins when the hobbit accidentally wakes the dragon up.

Overall The Desolation of Smaug is a much better film than its predecessor. Like An Unexpected Journey, they do have a lot things that are not seen in the book either. The most notable are the elves Legolas (from Lord of the Rings), and Tauriel who was never created by J. R. R. Tolkien. Despite Tauriel being completely new, I really liked her character. The only thing I didn't like is the cliff-hanger ending. Sure I already know what happens, but the final scene is so grand and it ends before it begins.
Posted by Adam at 11:36 AM

Adam the twins saw this and they really enjoy, they love hobbit:)

I fell asleep during it four times, which is again one time less than with the first one :) Thranduil kept me awake..... and of course my dearest Luke Evans

Saw this on the way back from Thailand and like you HATED the cliffhanger ending.

I loved LOTR too when it first came out, so much so that I read the book before the movies came out. I haven't bothered with the Hobbit movies though, I just can't be bothered!

Really enjoyed this one

I have only watched the first LOTR movie. I have the others on Tivo for when I have time to watch them, then I will move onto this trilogy.

I think Peter Jackson is ruining a simple introduction to The Lord of the Rings and he's trying to make it into something it's not. I found the first two episodes of The Hobbit tedious.

I am great fan of this saga and the Lord of the rings too. I hope you enjoyed mother´s day yesterday. Beautiful picture with your mum. Kisses:)