Fact of the Day: Darwin's Bulldog 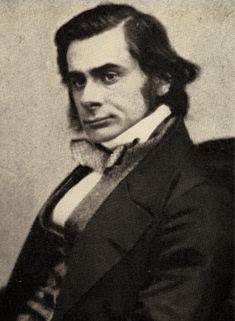 While Charles Darwin had quite the opposition with the theory of evolution, a supporter named Thomas Henry Huxley was so well known for his advocacy that he was nicknamed "Darwin's Bulldog". In 1860 he debated Church of England bishop (and talented public speaker) Samuel Wilberforce at Oxford. Wilberforce mocked him and asked Huxley if he was ashamed to have a "monkey" for an ancestor, for which Huxley responded that he would be more ashamed to be associated with a man who used his great gifts to obscure the truth.
Posted by Adam at 12:00 AM

Interesting, thanks for sharing :-)

LOL quite an awesome response by Mr. Huxley.

It bothers me that evolution is still considered by many to be a theory. Once something is proven using the scientific method it is no longer a theory; it's proven science.

Well, he did give him a compliment but then took it away.

well not exactly, it is and always will be a scientific theory meaning a very detailed explanation backed up with evidence.

Most people's concept of the word theory would be called a hypothesis in science.