Fact of the Day: Dolphin Honor 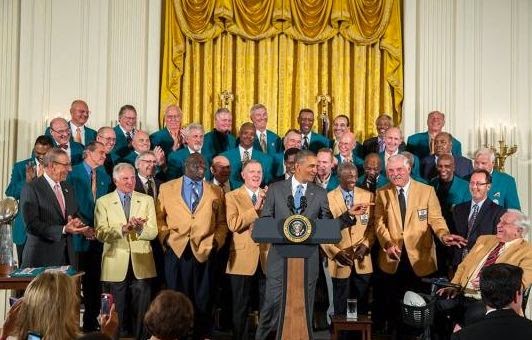 While the 1972 Miami Dolphins won the NFL's only perfect season, they were never invited by President Richard Nixon for an official White House visit. Many decades later in 2013, President Barack Obama invited the whole team for a visit since they never got to do so in the 1970s.
Posted by Adam at 12:00 AM

Email ThisBlogThis!Share to TwitterShare to FacebookShare to Pinterest
Labels: fact of the day, Florida, Football, Obama

Aaaaaw...that's too cute:) Yay for Obama.

That was lovely then.

Weird it took them so long

it hadn't become a tradition back then. Superbowl was still a new kind of thing.

I guess it's a good thing, although one can wonder why the president doesn't have more important things to attend to.

That's good of Obama, he is a sports fan.

Well, at least they finally got an invitation.

Even though I think Obama sucks, that was a nice thing for him to do.