Fact of the Day: Dust Bowl 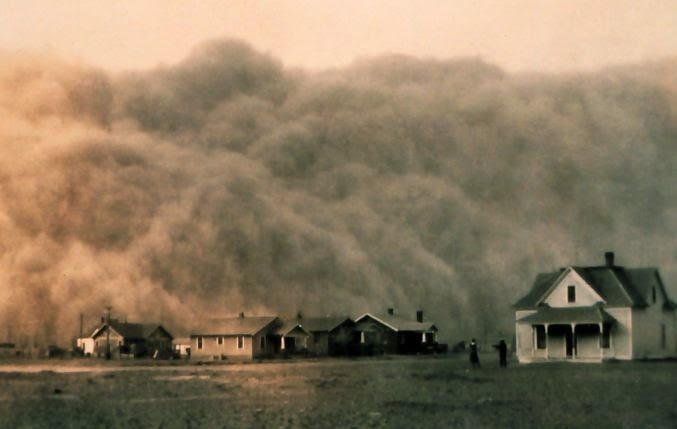 During the 1930s, the Dust Bowl was caused after severe drought met years of poor farming methods. Before the Dust Bowl a lot of soil was not properly taken care of, which turned to dust which was later taken by the wind. The dust and drought proved disastrous for farmers in Okalahoma and Texas, and many left their farms for a new life in California and other states. Ironically as soon as they left, The Great Depression crippled most of the economies of the places they were fleeing to.
Posted by Adam at 12:03 AM

Email ThisBlogThis!Share to TwitterShare to FacebookShare to Pinterest
Labels: California, fact of the day, Oklahoma, texas

It's good now that farming has come a long way from way back then.

Farming has always been hard, which is why I admire farmers. So much hard work, and fickle Mother Nature plays such an important factor.

This picture reminded me " The Wizard of Oz". Kisses:)

I learn so much from you.

It seems they just couldn't catch a break!

One bad thing after another

Bad time to be a farmer.

It was a sad and challenging time, and my mother still talks about it like it was yesterday.

Living in West Texas, we've seen many MANY dust and sand storms...when my husband was a baby, his mama would put wet sheets over his baby bed during the worst dust storms...it's a wonder he didn't get sick from THAT.
I've seen sand storms so bad (have blogged about some of them) that I couldn't see the trees in my front yard from the kitchen window.
The farmers thought they were doing the right thing when they were told to plow up their land during that time and it caused so many dust storms. Terrible times.
and, if you want to see hard times, rent THE GRAPES OF WRATH sometime and see how bad the storms could be...and how hard the depression was.

I can relate to the depression times, but fortunately never been in a severe sand storm. We still have them tho in Texas.

I've read a lot about the depression, your photo brings it all home.

It was a sad and depression time, great blog like it :)

The Dust Bowl and the Great Depression...talk about bad timing.
Then, when you consider they were followed by WWII, it's a wonder that generation never said, "Oh, eff this!"