Fact of the Day: Presidential Popcorn 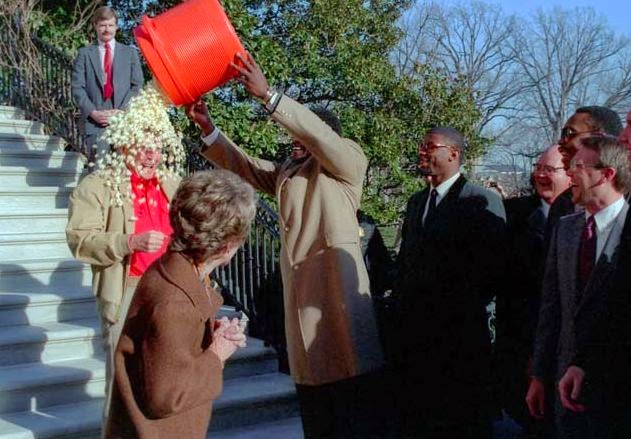 NFL player Harry Carson was among the first to make the practice of pouring a Gatorade cooler on a coach, a tradition after winning a football game. When his team The New York Giants went to celebrate their Super Bowl win at the White House in 1987, the cooler tradition was given to President Ronald Reagan. Except instead of Gatorade, Harry Carson poured popcorn instead.
Posted by Adam at 12:00 AM

Haha, I'd prefer popcorn to Gatorade, too!

Ha when I was a very little boy I remember seeing Harry Carson do this! Good times.

sounds offensive to me.

Wow, Gatorade? I prefer the popcorn!

It's really fun!
Dear I'm young fashion blogger, I would love to share my style and my ideas for outfits with you and all the world. Could you please do the favor to me and like my fanpage? I promise to do the same for you if you have the one :)
www.facebook.com/berriesfashion

I would much prefer the popcorn too!

I'd take popcorn any day as well

heheehhe, I think is better with popcorn. Kisses:)

I wonder if that messed up his hair.

lol! I would prefer popcorn if it's the non buttery kind :)

I LOVE this fact...surprised there were no jelly beans with the popcorn. :)