Fact of the Day: Salem 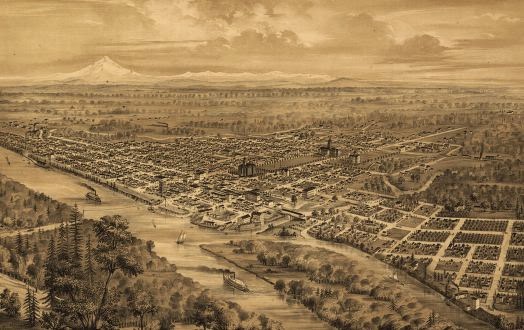 The name origin of Oregon's capital, Salem is disputed. Some think it was named after Salem, Massachusetts. Another theory is perhaps it was chosen because Salem is an Anglicized form of the Hebrew word "Shalom" which means "peace". Another guess is that Salem is the last five letters of the city Jerusalem.
Posted by Adam at 12:00 AM

Email ThisBlogThis!Share to TwitterShare to FacebookShare to Pinterest
Labels: fact of the day, Oregon

Good grief, it never dawned on me about Salem being the last letters of Jerusalem.
Amazing fact.
And, I'm with you on the little boxes of cereal...I buy them for the same reason that I get tired of the big box, morning after morning.
Thanks so much for coming by, Adam...and tell your little Daisy hello. :)
xo

I was interested in the Jerusalem theory. I never connected those dots before. I like the one for peace.

It reminds me of stephen king's salem' s lot!

The last five letters...what a link!

Have the best weekend ever,
-Kati

Never thought about the last 5 letter one before

Wow these are three cool possible origins. It's amazing that they can't track down the true source.

I suppose one will never know the true origin of the name.

These are very cool theories!

Yep, it's the capital of my state but no one seems to know the origin of the name.

All are very interesting choices.

I'd agree with the Massachusetts theory.

I like the second theory which has to do with the word Shalom, peace. Nice name. Kisses:)

All very interesting theories. I like the Shalom theory best though :)