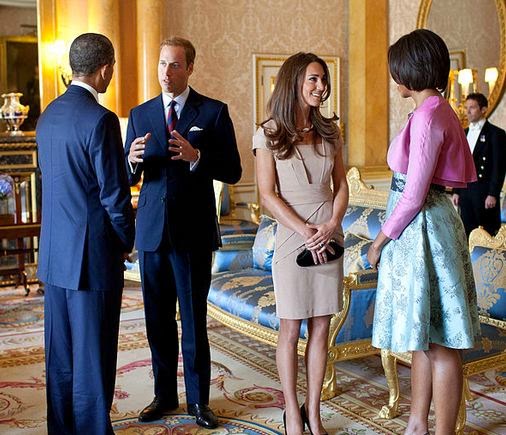 Not to sound mean, but I think it is rather ridiculous of how much attention the new babies of famous people get. But I suppose their first child George was the most special baby in the world, because unlike the children of Hollywood's notables he will probably be King of England one day. Now they are expecting a second child, and while people are excited now, I can expect if it's a boy then he'll probably end rather ignored the older he gets. Especially when it gets more obvious that he won't be King.

Though for the fun of guessing, I'll say the new baby will be a girl.
Posted by Adam at 11:00 PM

It's ok. Sadly it's people trying to live through celebrity rather than enjoying the life they have. On the flipside, congrats for them.

I couldn't care less about celebrities and their babies. However, I do think Will and Kate are one of the most lovely couples and do their part to make the world a better place. They actually deserve their fame, unlike some of the trash that gets paraded around the U.S.A. I think it's great they are expecting another baby and wish them all the best.

It will be a boy.
I don't see why people get so excited about the US Celebrities when the women gets pregnant....it's weird to me...However, it's different for the Duke & Duchess.

It's crazy how much attention this is getting, eh? Anyhoo, I'm guessing a boy just to be different:D

I am one of those thrilled at the news, something happy instead of the usual horrors, a bit of an escape.

Meh, whoopdi doo is all I can say as far as news goes. Great for them of course

king or no king he/she will still grow in extreme riches unlike most of us.... I think that Harry felt neglected because he isn't really Charles' son :) but the son of Diana's gingerhaired lover, that pollo player... what's his name?

I don't care much for celebrities in any way. All babies are happy news, famous or not. However, I do think Will and Kate are a nice couple, and I'm happy for them.

It is a fabulous new for William and Kate :)

Aw, I know. My sister said me this today.

I agree with the ridiculousness of the publicity on celebrity babies. I am happy for William and Kate, they are a lovely couple, and whatever the baby is, boy or girl, I pray it will be a healthy one.

I wouldn't want to be born into the Royal family, especially if it meant I was heir to the throne.