Fact of the Day: Amish 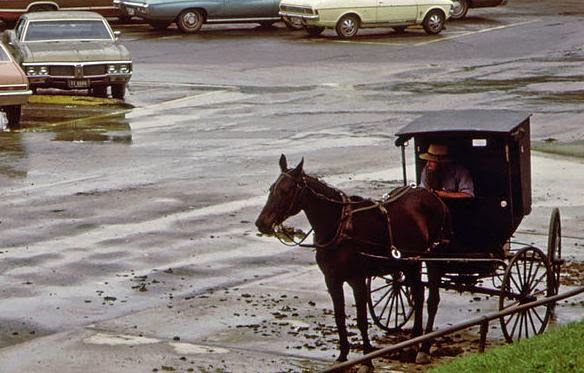 In 1693, there was a split between a group of Anabaptists in Switzerland. A man named Jakob Ammann led the more conservative members of the faith, and eventually fled to the present-day United States. Mostly in Pennsylvania as it was one of the rare places in the world at the time to have true religious tolerance. Ammann's followers became known by their current name, The Amish.
Posted by Adam at 12:00 AM

Email ThisBlogThis!Share to TwitterShare to FacebookShare to Pinterest
Labels: Christianity, fact of the day, Switzerland

William Penn made his Commonwealth a place of religious tolerance when it was very rare as you say!

The making of a bad man.

Interesting. We have Amish people here in Ontario Canada.

Never knew that, they can keep their religion though

The Amish have always intrigued me. So do Shakers, Hutterites, Mennonites and any culture that chooses to "live apart" and follow its own rules. Wouldn't want to join them but am intrigued by them.

Agree with the comment above. The Amish intrigue me too.

I visited the Amish area in Pennsylvania back in 2008. We stopped off nearby for a couple of days and drove over to tour. Very fascinating. And like Christine already stated, we have Amish in Ontario.

I didn't know where the name came from so I find this interesting, although I question the wisdom of creating communities cut off from the rest of the world. Of course Christians did this with monasteries and convents.

We have an Amish community not too far from where I live. They make the best donuts ever!

I did not know any of their history and this is very interesting. They seem almost like a community locked out of time.

Fascinating, Adam. Thanks for sharing.

I don't know a whole lot of their beliefs other than they don't like modern things.
Of course, I fell head over heels in love with HARRISON FORD in WITNESS...a WONDERFUL movie that if you've not seen, you really should. About him and an Amish family...think I'll just buy it off Amazon, now that I'm thinking of it....:)