Fact of the Day: Lincoln Ghost 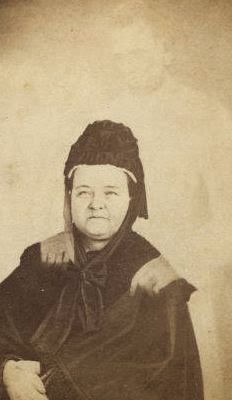 While stories of Lincoln's ghost in the White House have been numerous, there was even a story of a photo of his spirit. A man named William H. Mumler apparently took a picture of Mary Todd Lincoln with the ghost of her husband. However Mumler was quite well known for taking ghostly photos, but P.T. Barnum went after him and ruined his career after artificially making his own ghost pictures.
Posted by Adam at 12:00 AM

Email ThisBlogThis!Share to TwitterShare to FacebookShare to Pinterest
Labels: Abraham Lincoln, fact of the day

OMG nothing has changed so far....

It's real? I would think that this is photoshop, but then phooshop doesn't exist.

lol worth a shot I suppose

I´m becoming to be worried about this fact...Kisses:)

Wouldn't it have been hilarious if the picture of Lincoln's ghost was grabbing himself a handful of one of Mary's boobies?
Al Penwasser: Going For the Lowest Common Denominator Since 2009

Unfortunately, many people were duped by what turned out to be double exposures.

Easier to be fooled back then