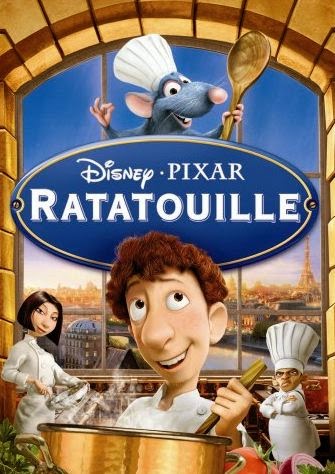 I really love Pixar, but I have to admit I don't really know why I haven't seen Ratatouille until now. It's been out for a long time, but I suppose the story of a mouse that cooks didn't sound too exciting. Boy was I wrong! 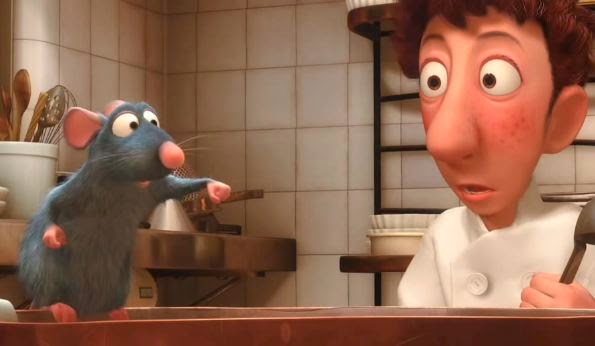 The story begins with a rat named Remy. Unlike his rodent relatives, he's gifted with a wonderful sense of smell which has led him to an appreciation of French cuisine. He's separated from his family and ends up in Paris. He goes to the restaurant of his favorite (and departed) chef, and creates a soup that everyone thinks was made by the guy who throws away the garbage. The soup is accidentally taken out for a patron, and Alfredo Linguini thinks he might be unemployed if they don't like it. 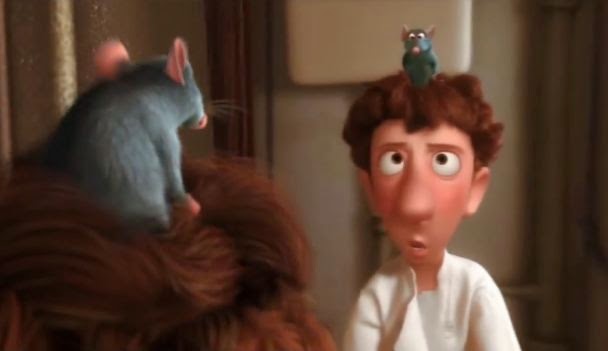 Turns out that they didn't like the soup, but they loved it. Alfredo can't exactly understand Remy, but the two figure out a system where the mouse can teach the human how to cook. Hiding in a chef hat, Remy pulls his hair to control what he does in the kitchen. Fortunately Remy is a better cook than his idol Auguste Gusteau, which leads Alfredo to be a real chef. However he must make sure nobody knows that there is a mouse in the kitchen. 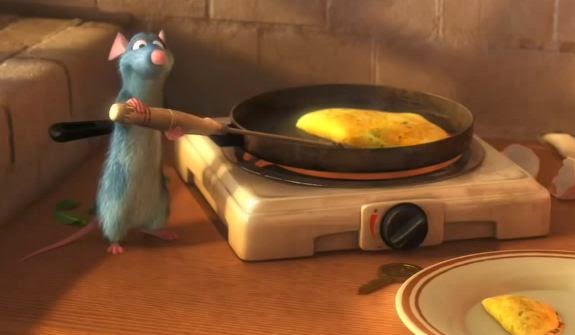 While I wouldn't consider it Pixar's best film, it's certainly one of the best. I never cared for cooking shows or fine cuisine but the movie is not really about food. A very sweet tale of friendship, and a story you just don't see everyday. I feel like an idiot for missing out on it for about seven years.
Posted by Adam at 3:00 PM

Me and the kids loved this movie too:) That scene near the end with Anton Ego eating the soup is one of my faves!

I really loved this film! and besides it's in Paris! so it's a must watch! :p
have a great week!

I love it this movie is one of my favorites,
Remy is a great dreamer~
xx

I LOVED this little movie. A grandgirl and I went to see it when it first came out.
and...
when we were moving last winter, my whole house looked like Sanford and Son..haha...thanks for coming by, Adam.

This was one of the first movies we watched after purchasing our high definition TV. I remember the copper pots and cooking utensils looking amazing.

I like this movie too. Follow your dreams, no matter who you are or how unlikely those dreams are!