Fact of the Day: Heroic Dan 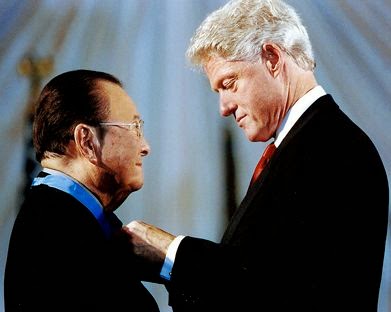 During World War II, Daniel Inouye was seriously wounded in Italy but disregarded his own personal safety and led his platoon to successfully defeat Axis soldiers. When he returned home, he later was elected to represent Hawaii as a Democratic congressman and later a senator. In 2000, Inouye along with 21 other Asian-American World War II veterans received the Medal of Honor as it was discovered that prejudiced officials gave them lesser honors in the 1940's.
Posted by Adam at 12:00 AM

Email ThisBlogThis!Share to TwitterShare to FacebookShare to Pinterest
Labels: democrat, fact of the day, world war 2

I hope I never have to experience war..

I think he was truly honoured.

A brave and honourable man.

It was well past due it seems

about time I'd say

Daniel Inouye represents what it means to be an outstanding American.

I am glad to hear they finally got the recognition they deserved!

Thank you! We miss Dan!

Definitely past due. I remember reading about this at the time. Thanks Adam.

Past due but better late than never.