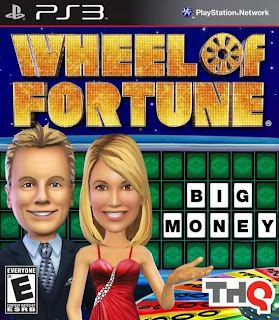 I remember games based on game shows back in the 90's. They were often fairly terrible, and sometimes not even close to how the TV show was. But with modern technology, they can now get pretty darn close. THQ made a version of Jeopardy I really liked, so I wondered if Wheel of Fortune was any good. 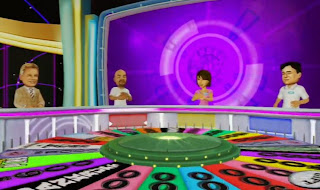 I was never the biggest fan of the show, but I do think the concept is fun. The game is pretty much the same flow of the show. You compete against two other people by solving word guessing puzzles. You also get to the spin the fun wheel to advance or lose everything. 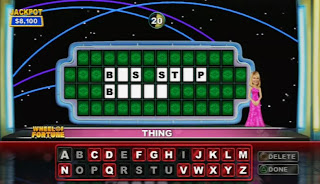 The way of answering puzzles is fairly easy, and they give you plenty of time to do so. The only disadvantage is that spelling has to be exact. Though I only had one instance where I couldn't remember the proper way to spell one thing. 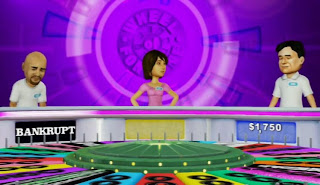 This is actually one of the few games my fiancee Daisy played with me, and she loved it more than I did. I would of liked it a little better if I could of found some people playing it online. I will say that like Jeopardy, Wheel of Fortune recreates the show remarkably well.

We love boardgames...Password has been my all-time favorite.
And, did you see I gave you a shout-out on my Bundt Cake Challenge post??

Well, guess what I watched tonight - on the TV - you guessed it. My father-in-law is visiting and he has been watching it since its very beginnings with the other host. I enjoyed it. I would probably enjoy this game also.

Board games of gameshows began way before the 90's...perhaps the 50's or 60's, as I recall. Password was my absolute favourite!

No board games but Quiddler has been my favorite for the last 10-15 years. It's described as "The SHORT Word Game." We put together two decks, get 5-7 people and laugh at each other. Oh and you need a dictionary!!

That sounds kind of fun!

I used to love playing Family Feud, thought I played it so much I had all the answers memorized quickly.

Maybe I'd play this game, if I were trapped in a cabin in a blizzard.

Yes, well bj's comment was on board games, which is why I mentioned them.

And I don't like, nor do I play, video games.