Fact of the Day: Dire Wolf 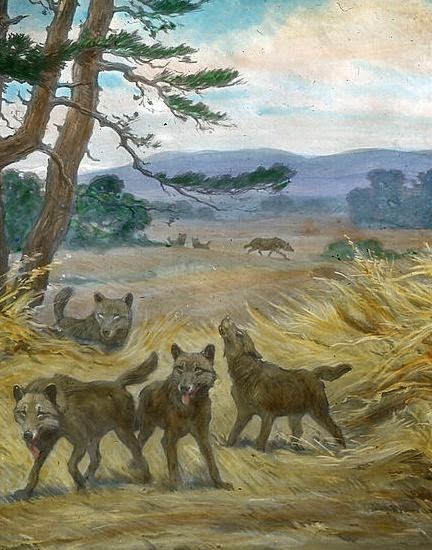 Many thousands of years ago, the dire wolf lived in both North America and South America. It was larger than the Gray Wolf, and stronger as well. However about 10,000 years ago, many of larger animals that were its prey died out. They co-existed with other wolves, like the gray wolf, but were much slower. Their slow speed might have led to their extinction as they weren't as fast to catch smaller animals.
Posted by Adam at 12:00 AM

Email ThisBlogThis!Share to TwitterShare to FacebookShare to Pinterest
Labels: evolution, fact of the day

That's interesting to know that, records and research from long ago.

It was probably due to man, always is.

LOLZ....I thought this post is about GoT for a second:D

They got too greedy and munched on all the big animals. Or man probably screwed it up

Now we have suburban wolves/coyote combo deals. Nature finds a way. Love that.

Lots of bad things happened about 10,000 years ago! Big climate changes, the arrival of human hunters in the Americas, the Clovis point, to name a few. But, you might be spot on ~ maybe the dire wolf was like big linebackers who can't run too fast! Have a happy day, Adam!

good thing for the smaller animals!

I've never heard of them before.

That's too bad. Wolves are so beautiful!

Okay - so you might say, they were in dire need of food..no?

Very interesting! I've never heard of them either.