Fact of the Day: Freedom of Religion in Afghanistan 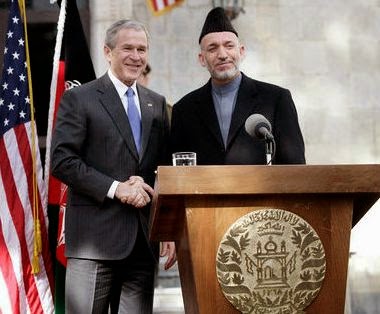 Despite the United States (and NATO forces) overthrowing a extremely religious government in Afghanistan, freedom of religion hasn't gotten much better since then. The country is still an Islamic Republic, and being an atheist or convert to another religion isn't tolerated. An Afghan atheist was granted asylum to the United Kingdom in 2014, and several converts to Christianity were saved when western nations put pressure on the Afghan government in previous years.
Posted by Adam at 12:00 AM

Email ThisBlogThis!Share to TwitterShare to FacebookShare to Pinterest
Labels: Afghanistan, fact of the day

I can imagine that from Afghanistan.

Happy February 15th. I always like your factual posts.

can't stand the monkey face of that evil idiot Bush

That's too bad. People should believe or not believe whatever they want.

Forced into belief, how all religion came to be

Yes, Muslims don't take kindly to apostates. But as Pat Hatt pointed out, never did Christianity or other religions either, back in the old days. Fundamentalists in those religions today still don't.

This is the way of the world.

Freedom of religion is very important to me. Thanks for stopping by my blog Adam!

There are so many freedoms we take for granted every day.

Unfortunately, religion and intolerance about it is the root of so much violence...

There certainly is a lot of upheaval and violence in the name of religion.

Personally, I don't think the US should support any government based on a religion. This includes Saudi Arabia and Israel.

I prefer, "Freedom from Religion."

Just to wish you a happy day, Adam.