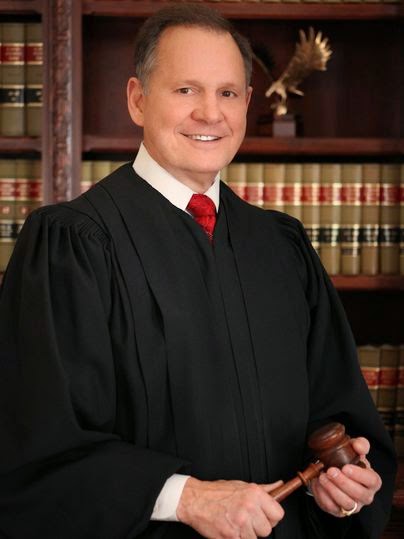 Alabama has never been the state in favor of civil rights, but a federal judge recently ruled that same-gender couples could marry in the very conservative state. Alabama's Supreme Court Chief Justice Roy Moore has ordered his probate judges not to issue marriages to such couples, which defies not only the federal court but the 14th amendment to the U.S. Constitution. Roy Moore has made no secret for his love of using his religious views to ignore the laws of our land, and he should do the moral thing and resign. He should just retire and go somewhere where he'd be more comfortable, like the Dark Ages.
Posted by Adam at 11:32 PM

Wow, it never surprises me at what some people think they can get away with because of their position.

Hahahaha..."like the Dark Ages". I love that! Hilarious.

I hope he doesn't get away with this. Can he really legally do this?

I just read about this, and I couldn't agree with you more.

Well, you know me...very VERY old fashioned...HECK...I AM OLDEN....so I go along with this judge.

I read about this too. He's also the guy who wanted the Ten Commandments monument to be removed from the Alabama Judicial Building right?

well wanted to he wanted the monument to stay, but yeah that's the guy