Question: What Did You Think of Katy Perry's Half-Time Show? 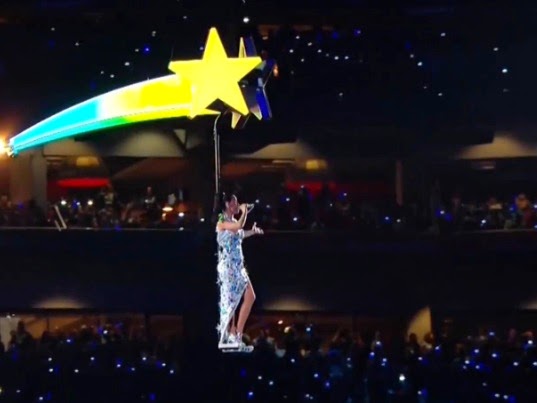 Some years I just leave the room when the half-time show comes on during the Super Bowl, but I like Katy Perry so I wanted to see how her performance was going to be. I admit that the robot lion, and a lot of the other stuff was visually pretty cool. But I think maybe because of all the stuff going on (not to mention constant costume changes), that Katy Perry's singing was rather weak. A lot of people were really excited to see a surprise performance by Missy Elliot, but I don't even know she is and to be honest I don't think I care.

So to those who saw the Super Bowl, did you think Katy Perry was good or bad?
Posted by Adam at 12:53 PM

haha from what I read it seems many thought it lackluster

I thought she was good, but was she lip syncing most of the time? I did love that robot lion though....And Missy was my fave! hehe...

I think she rocks it!

I thought it was ehhh. Nothing spectacular, but I loved that Lenny and Missy made a cameo!

I thought it was a pretty good show, one that probably looked good in the stadium as well as on TV.

I liked the show. Better than most. The sound wasn't the greatest, though. Missy Elliot is on my shuffle...good workout music.

I thought her singing was weak too and the show was so so, but I'm not a great music critic.