Fact of the Day: Lou Gehrig 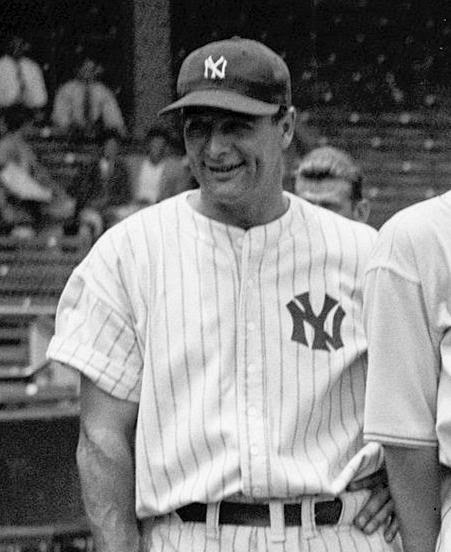 Lou Gehrig was a famous baseball player who played for the New York Yankees. His skill earned himself the nickname "The Iron Horse". However, near the end of his career people started to notice he was playing a lot worse for an unexplained reason. He suffered from amyotrophic lateral sclerosis (now commonly known as Lou Gehrig's disease) which originates in the brain that doesn't really affect mental ability but eventually renders most of the muscles in the body useless. While some people have survived the illness, Lou Gehrig did not as he died in 1941.
Posted by Adam at 12:00 AM

Email ThisBlogThis!Share to TwitterShare to FacebookShare to Pinterest
Labels: Baseball, fact of the day

Now his prowess is forgotten, and his name is a disease....kinda sad

I wasn't aware of this fact! Thanks for sharing :)

Is that the same as Motor Neuron Disease? I will look it up.

I'm glad it's becoming more commonly known as ALS now. I say let the man have his baseball achievements as his legacy, and not let him just be known as 'that guy with that disease.'

Oh my, he must have suffered.

If I'm not mistaken, this is the same disease that afflicts famous physicist Stephen Hawking.

The Pride of the Yankees, 1940 something, with Gary Cooper, waas the BEST olden movie...I started crying at the beginning and cried all the way thru it. Such a good movie about an absolute BaseBall Superstar.

I agree with ABftS guys!!!

It's so very sad that he had to die of this.