Question: Do You Ever Think Humans Will Ever Walk on Mars? 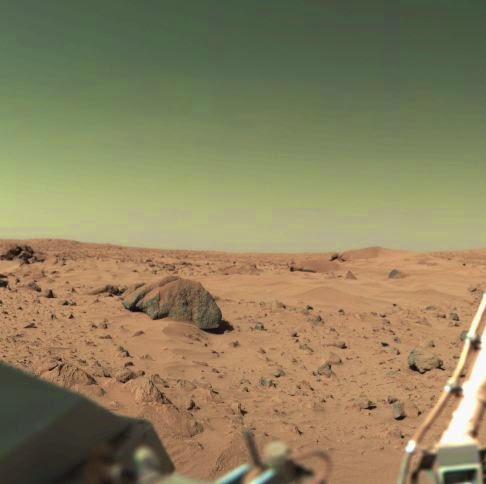 While it's the dream of many people to see astronauts on Mars, I don't see it becoming a reality anytime soon. While the solar system is a tiny spot in out galaxy, the gap between Earth and Mars is still very far when you have real humans in the space-craft. I wouldn't be surprised if it took us one or two hundred years to walk on Mars. I don't think humanity will ever colonize the planet either. Humans wouldn't last very long on Mars without a space-suit, so everything would have to built with technology to merely survive. Without a lot of water and food, I could not see a little city on Mars lasting long.

When you do you think astronauts will reach Mars?
Posted by Adam at 3:00 PM

Referring to living on another planet, someone once said this to me, "Eventually, we're gonna have to move."

hmm...I don't think it is possible, but I am a cautious type.

Of course humans will not be able to survive on another planet,
but that does not mean that we shouldn't stop members of
the US "Tea Party" especially Ted Cruz and Mme. Palin.
They can go with the loonies of ISIL !!!

Wow what a "hot diggity" clam bake they'll have on Mars!

Aren't they sending up a group of people to Mars quite soon? Thanks for your latest comment on my blog.

It will be possible one day with new technology but when, I dont' know !! :)

What happened to that group that has signed up to go? Someone said it's going to be a one-way trip, though? Seems they should wait for the technology to make it so that it's not a suicide mission.

I think a lot of things will eventually happen, walking on Mars included. But we'll never see any of that 'cause we'll all be long gone.

Nope...can't see us walking on Mars ever. Just not meant to be, maybe.

Not any time soon, we need star trek such spaceships first

I can't predict when we'll be on Mars. When I was a kid watching the moon landing I'd have thought we'd have a colony on the moon by 2015.

Won't be in my lifetime!

I'm currently translating a book in which humans live on Mars and all other planets :)

Not in our lifetime, I don't think so.

I highly doubt that man will ever colonize Mars. I can't even imagine getting there. Wow! Sounds so scary to think about.