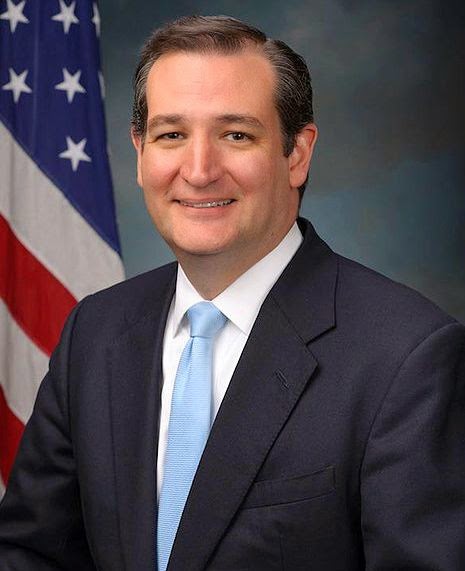 The first candidate from either major party to officially announce their run for the presidency in 2016 was born in Canada. Ted Cruz is the darling of the far-right conservatives, the same group that kept talking about the conspiracy that President Obama was born in Kenya, despite the evidence that he was born in Hawaii. Funny how they were darn sure Obama could not be president, but even if their conspiracy was true, Ted Cruz also had an American mother and a foreign father. How hypocritical can people be? They were so confident about Obama, but now they are so easily convinced that Ted Cruz can legally be president.
Posted by Adam at 3:00 PM

People can be extremely hypocritical when they want things their way.

"Hypocrites" doesn't even BEGIN to cover it! Throw in "Racists" for good measure.

Conservationism in the extreme is very disconcerting.
Our government is so divided. Very sad. I can't help wondering where our country is headed.

lol always different when the shoe is on the other foot

Yep - so bloody true about the Far Right and that "Tea Party" mob regarding Obama's heritage and birthplace.
And God forbid as a kid when his mother worked in Djarkarta (Indonesia) with the US Embassy and he went to school there - Good Lord - he became a Muslim so they, the Obama haters believed!
Funny how at school holiday times, he returned to his grandparents with Pan-Am
via Australia to stay with his grandparents in Kansas first (I believe) and then Hawaii!
Read his book - "Dreams of My Father" - very informative, but certainly not on the bookshelves of members of the Far Right bigots!
Cheers
Colin
Brisbane. Australia.

Cruz' mother, Eleanor Darragh, was a US citizen from Delaware. His father, Rafael Cruz, was a Cuban national who had received a green card while living in the US (he eventually became a US citizen in 2005). Under American law, Cruz would be born an American despite having only one US citizen parent as long as that parent — his mother — had physically lived in the United States for at least five years, and two of those years had been after her 15th birthday. Cruz's mother easily cleared that bar, so his citizenship is not debatable.
I know I am the only Republican in this pool but I can have my say, too. I don't think the question of where he was born is going to be his downfall as a contender for president...I just don't think he has what it takes....period.

You've got to be kidding me? I didn't know he was born in Canada. Wow! So Birthers have no problem with that, hunh?