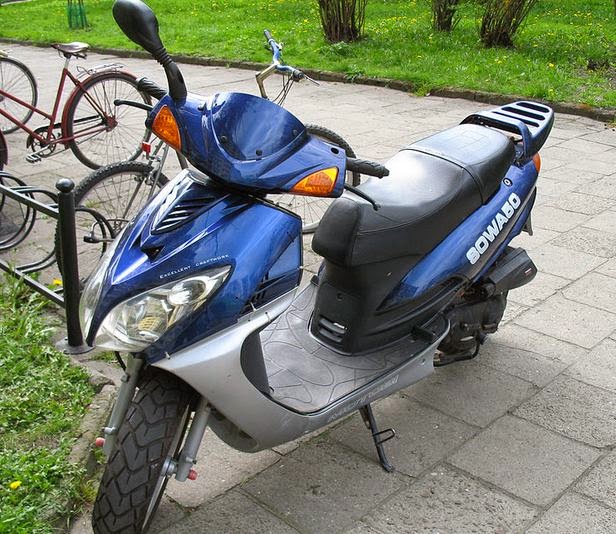 My brother Zach got the not-so-bright idea to get one of those scooter motorcycles about eight years ago. He wanted to avoid constant trips to the gas station, but I guess he didn't feel too safe on it because I think he might of only driven it 500 miles at most. He used to leave it behind the front porch and one night he came home rather late in his car. He pulled up, and there was at least three or four guys carrying his scooter down the road. They dropped it and ran. After that he kept it in the backyard, and with a cable and lock.
Posted by Adam at 2:00 PM

oh, I am sorry. Scooters are cheaper to maintain but I would rather choose a car always, they look like safer.Kisses :)

ha so sad so sad

Poor thing, your brother I mean!

ha so sad so sad

Wah Hoo that is one fancy looking scooter. If he rides it or not, it is a pity that others feel they have a right to his scooter.

That is terrible. Lousy thieves...

That's right -- you've got to nail everything down in this world! Glad he saved it from being stolen. But I wouldn't feel safe on one of those things either.

It's a cool looking ride. Glad it wasn't pinched.

Wow, glad he came back in time. It looks a real neat looking scooter.

I love my scooter, but I am a licensed biker for decades now. It is very different from driving a car and not for everybody. Get skill training, it only SEEMS easy.

Well he was so very lucky to come home at the right time...lucky it wasn't damaged too much when dropped by the thieves. A few people have scooters down here but I don't see that many of them.

I can imagine his surprise seeing some thugs carrying off his scooter like that. Glad they didn't get away with it!

Good thing he came home when he did!!