Hillary Clinton Is Apparently Running For President in 2016 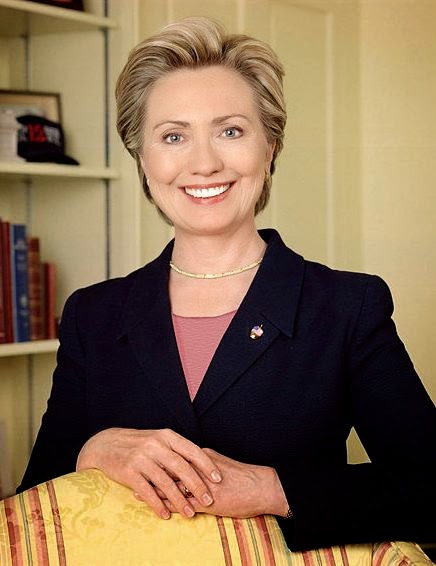 While it won't be "official" until Sunday, the former First Lady, Senator, and Secretary of State will be running for the Democratic nomination in 2016. As a Democrat, I'm not that excited. I'd rather have her as president than anybody currently running on the Republican side. I'd like to see a woman be president in my life-time, but honestly I'd rather see Elizabeth Warren be that person.
Posted by Adam at 10:32 PM

Well she is far better than the present "declared" Republican candidates, but
dynasties - not so sure if that is best. I think from what I have read Elizabeth
Warren would be better. However, we had a woman PM here, Julia Gillard and she was a total disaster. More shifty than a demented worm.
Still the German Chancellor, Merkel, seems to be doing a pretty good job.
Cheers and good luck for 2016. Remember the World is watching - CAREFULLY!
Colin (Australia).

I don't like her. Not one bit. I will NOT vote for her.

she's a monstrous monster, killed millions of people around the world. I wish her all the worst in life.
PS, love your new profile pic, Adam

It is certainly going to be an interesting run.

No secret that I am a Republican...I can't imagine ANYone voting for her. She has lied, cheated and the joke of her "job" of being Sec. of State should show people that she would make a terrible Commander in Chief. I've lost a lot of faith in people voting for leadership that CARED about the United States....praying she doesn't become our leader.

I don't know much about the politicians in your country, but I would love to eventually see a woman as president.

I am an Independent and I have no clue who I will end up voting for. Not a fan of really anyone at the moment. I really don't see much difference between the two big parties.

I had a feeling she would be running. I wonder who is going to win this time.

I agree with you completely.

Is she made of wax in that photo?

Wow!
You do have a nasty streak in you. That what you say is a load of utter
trash best found in a filthy rubbish dump in downtown LA!!!
I hope the US State Department has denied you to get a passport.
What an embarrassment you would be!!!!
Colin (Australia)

I'm not quite sure