Fact of the Day: Space Pencils 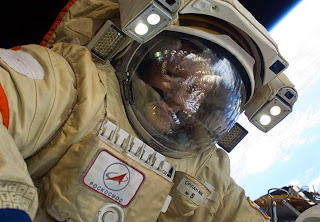 A story out there is that NASA spent millions developing a space-pen when Soviet/Russian cosmonauts just used pencils is a bit untrue. Like the cosmonauts, American astronauts would use pencils to write in space. However pencils tips often break off which can lead to harming space-equipment. The space-pen does exist, but it was not NASA's invention as a company came up with a pen that could write in almost any condition and later offered it to NASA.
Posted by Adam at 8:00 AM

Email ThisBlogThis!Share to TwitterShare to FacebookShare to Pinterest
Labels: fact of the day, russia, Soviet Union

All is now clear! Thanks, Adam.

I think Seinfeld used that pen in a few episodes

We have lost two Space Pens. They are cool.

things you don't think about needing in space...interesting.

Clear as a bell now

I had one but my neighbor said it floated away. Should I suspect he took it?

I thought they used computers to write;I have never thought about this question. Kisses:)

Very interesting fact. It's amazing that something as small as a broken off pencil tip could inflict damage in space.

Never heard of those but I did have some astronaut ice cream. It's freeze dried ice cream and it really wasn't good. lol

I've heard this story, but didn't believe it.

Wow! You never think a writing instrument could cause so much trouble.

Awe, nothing can beat it.