Fact of the Day: Vasa Ship 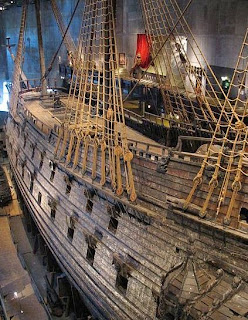 During the 17th century, a Swedish warship named Vasa was built. King Gustavus Adolphus wanted the warship to be a powerhouse in the Thirty Years War, but she sank on her maiden voyage. The reason may have been because nobody wanted to tell the king of its problems, like it having too much weight on top.
Posted by Adam at 8:00 AM

Wow. That is bad!

"This ship is an absolute disaster. Should we tell the king?"
"Nah, let's just let this play out."
Brilliant!

An easy mistake to make, right?

Another maiden bites the dust?

The king must not have been too happy

I had a cat called Gustav :)

Gee, too bad for the captain and his crew..sinking to the bottom because that was better than telling the king?