Martin O'Malley is Running For President 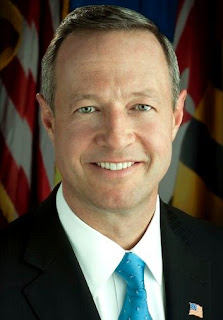 While it seems almost any Republican mentioned on a national level think they have what it takes to be President, the Democratic side has seen fewer volunteers. While I like Bernie Sanders the most of the three currently running, I see two-term Governor of Maryland Martin O'Malley having the best chance of winning the general election. Even though I'm a Democrat, I'm not excited for Hilary Clinton's 2016 run. She's getting too old, made many mistakes in and out of office, and every presidential candidate needs their whole party's full support which I don't think she'll get.
Posted by Adam at 1:00 PM

If we assume that Hillary is able to brush off the various "scandals" and probes the Republicans are launching and stay in the race till the primary, she gets the nomination. My fear is that Sanders or O'Malley will be strong independent candidates and split the votes enough to let the Republicans sneak in. The real wildcard is Elizabeth Warren.

I don't believe Sanders or O'Malley will actually run in the general election as independents. Both men are smart enough to realize that would be like electing a Republican

One Clinton was enough, and certainly please God not another Bush.
Neither Sanders nor O'Malley would run as independents - too silly for words and they are far more intelligent than that.
Anyhow as it draws nearer the World at large will be closely watching.
Cheers
Colin (Brisbane. Australia.)

Oh, I have a million things I would LIKE to write here...but,...I won't. I think you know I am a Republican...so, from now own, if I see your post is political ..I'll just say HEY to let you know I've been here and pass on thru. :)

Well as you are "pure Texan", which would suggest you are from the US state which is reintroducing cowboy style guns to be allowed due to the possibility of a Spanish / Mexican attack on the Alamo, I hardly think that your comments are worth a pinch of bloody Texan SHIT!
The two US states of Charles Darwin's theory re: evolution are Texas and Tennessee - funny eh? - just the two T's.
Now get back to your bible, "bj" and pray for that ratbag from Alaska.
What's her name - of yes Sarah Palin!

Don't ever venture into Australia - we have laws against bigots and ratbags
like you.
Colin