My Favorite Photos: Best Man and the Maid of Honor 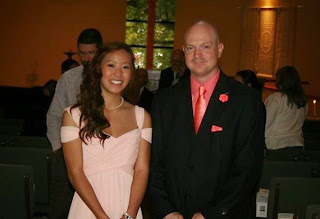 Unlike some weddings, we only had one member of the bridesmaid/groomsman be in our wedding. My brother Brandon was quite honored being my best man. We almost had a crisis when Daisy's cousin Tiffany was suppose to be the maid of honor, but she ended up not being able to make it. Luckily the dress we had gotten for Tiffany also fit her cousin Alyna. She was actually Daisy's first choice, though her mom made her pick Tiffany since Alyna had lived all the way in Minnesota. 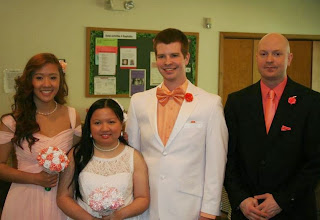 But I was really glad both of them were able to be part of our wedding. I know Daisy was glad to have Alyna be her maid of honor, as the bond is stronger with her than most of her other cousins. She is probably the closest thing Daisy has to a sister.
Posted by Adam at 6:57 AM

So glad it all worked out and fabulous memories were made. Thanks for sharing the lovely photos.

You all look great and happy. It's good it worked out well.

Glad it all worked out in the end

Everyone looks so nice and colour coordinated too!

How great that this glitch didn't throw Daisy into a tailspin. Many a bride would have been rattled by this. I think you've got yourself a keeper. Take care, and see you in three weeks when I return from vacation.

Glad it all worked out and that everyone made it out happy. There's nothing worse than having something like that ruin your big day when it doesn't have to.

How cute!! Congrats on your wedding!

Love the picture and that dress is so cute.

does tiffany read your blog?

Glad to hear that it all worked out in the end!! Oh and you all look amazing!!! That picture is totally worth a frame. :)

Nice photos...and so glad things worked out smoothly. You sure do look mighty handsome and she is a dream.

nice yo hear that Daisy got her wish:)

They look great, and I love how his shirt and tie match yours, Adam, and I love the colour, too. :)

They look great, and I love how his shirt and tie match yours, Adam, and I love the colour, too. :)