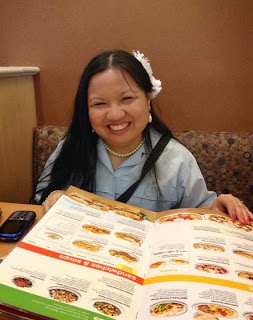 On the night we were married, Daisy obviously wanted to go out to eat. She had already been to her favorite restaurant Longhorn Steakhouse, a mere four days before (for our anniversary of dating) so we wanted something different. We went to IHOP, and I always like going there during the evenings. It's busier during mornings (as it's more known for breakfast), so I enjoy restaurants that have less people and a more calmer mood.
Posted by Adam at 8:00 AM

That sounds like a great choice since you were both happy with it! How did you two meet, I'm curious. Thanks for stopping by my blog Adam :)

Your blog chronicle of your wedding has lasted longer than my first marriage.
Hahaha

She looks so happy, good husband!

Lovely image. She looks so happy. It's always nicer when a restaurant is quiet.

I like 'em quiet too. Restaurants, not women. It's awesome to see your darling bride looking so happy.

Far better restaurants that are calm and quiet.
xx

You no matter the occasion, you still have to eat. I probably would not been able to eat.

You are a wonderful husband, Adam!

She is so cute. So, what did you order?

I like doing ihop at night too, so we can avoid the crowd.