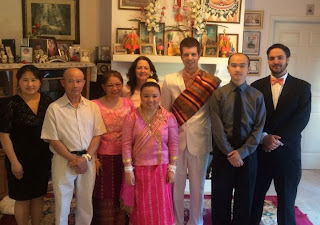 Daisy was born in Minnesota but her parents are from Laos, so whether she liked it or not, they made sure to give her a proper Laotian Wedding too. They are usually held at the bride's family's home, and we had our American-style wedding on Friday, and this one the next day. The rules were a little different too, as my brother Brandon could not be my best man for this one as he was married. So I had my friend John step in. 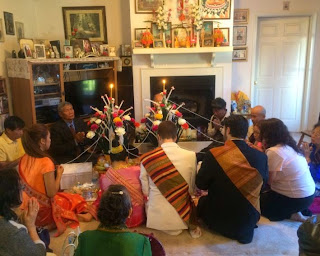 To be honest I wasn't really looking forward to it, one of the reasons is that most of the words said during the ceremony are in Laotian which I speak none. You also have to lay down on the floor uncomfortably and it lasts more than an hour with no breaks. I was trying my best to endure the pain, and I eventually lost all feeling in my legs. 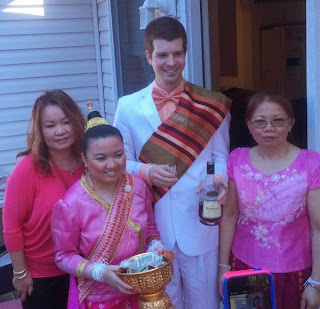 After it was over, while everyone was eating they made us do a tradition where I pour whiskey for any guest who wanted it. It was a little weird considering I don't (and never have) drink alcohol. Since I've been with Daisy for five years, I've noticed something you usually see with people who were born in Laos that you don't see in people who are of Laotian descent; they LOVE to drink, but perhaps a bit too much.
Posted by Adam at 8:00 AM

What an interesting ceremony, especially having to lay down for an hour. I know some of it sounds uncomfortable, but at least you got to marry the woman you love twice?

You all looked great. I understand what you mean though...it's hard to be a part of ceremony where you don't understand what's being said. Nonetheless, the whole experience sounds pretty cool:) Congrats (again)! :D

Very cool and you both look gorgeous in the traditional attire!

Really enjoy hearing about other wedding traditions, but dang it, I hate that you had to deal with all that discomfort in the name of love. The good thing is that you married the love of your life and get to tell us all about it! (lol) Hugs..and congrats on 5 years of marital bliss...Ro

Enjoyed this multi-cultural post Adam, sorry you lost the feeling in your legs, lol,

Very nice ceremony. It's interesting to learn about other cultures. But sorry about the discomfort!

One thing for sure, this marriage should last after all these ceremonies. Loved hearing about it.

I find different cultures so interesting. Guests lie down during the ceremony? That's unusual...

well you all look beautiful! I enjoyed learning of this tradition, sorry about your legs going to sleep,, lol,

Wow, that looks so lovely Adam!

Well that's interesting. I am sure that you will cherish the memories though.

I love that it's so colourful!

I really enjoyed this post, Adam. It is so interesting and I had to to bust out laughing when I read about losing all feeling in your legs. You just tickle me to death....I told my daughter and grandgirls about you and tho they don't blog, they read YOUR blog and think you are so funny. We love ya, Adam...:)
Oh and how tall are you ?? I can't decide if you are really tall or Daisy is really short.:)

My niece married a Chinese man and it sounds very similar to your experience. She and her new husband had a traditional wedding (to which none of us were invited, with the exception of my sister and her husband). Then, they had a "Western" ceremony. With a "Western" reception. Where my niece's side of the family all got a little drunk. Much to the chagrin, probably, of the new Chinese members of the Penwasser family.

That was very correct of you Adam to respect the wishes of the Lao part of your
new family.
As you married Daisy ( the so-called Western way), it is only appropriate
that you should do the same in the Eastern way.
Some of your "Yankie" commentators show no respect, but that it quite
normal for Yanks!!
See previous blog on Alvin York - one idiot obviously can't read, clearly stated
that a movie was made - yet this "ignoramus" failed to read this, asking if a movie
is to be made - the bloody movie was made before the bombing of Pearl Harbour
and thus the US's belated entry into WW2 - 1941!!
Colin (Brisbane. Australia>)

This is so beautiful, Adam. It's wonderful to honor both sides of the family.

Stunning ceremony ! Daisy is marvelous. A lot of happiness to you :)