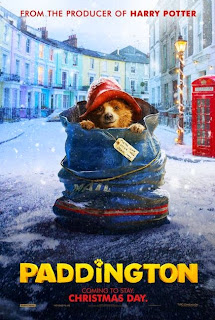 Paddington Bear has been a classic children's book character since 1958. I actually had never heard of him until very recently. I suppose he's more popular in Great Britian than he was in America. Now there is a feature film for Paddington, and I decided to see if I would like the ol' bear myself. 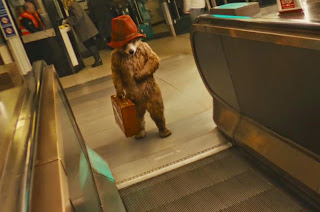 Paddington Bear's story first starts before he was born. An English explorer goes to Peru and finds his aunt and uncle, and teaches the two bears culture and some basic English. Many years later, Paddington's uncle dies and his aunt sends him to find a new home in London, England. While Paddington misses his aunt, he's excited about London and Mr. Brown and his family end up giving him a roof over his head for the night. 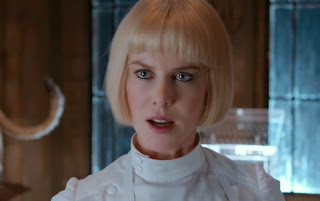 Unknown to Mr. Brown or Paddington is that a taxidermist named Millicent has taken quite the notice of Paddington. While her habit (or perhaps passion) of stuffing animals is quite clear, her obsession with Paddington seems quite personal. While Paddington is focused on finding a home and family, he'll end up trying to figure out how to escape from Millicent. 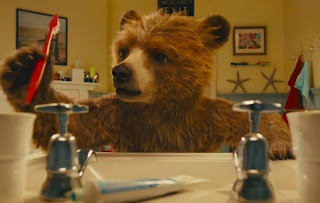 I can see why the polite and adorable Paddington Bear is such a classic character in the realm of children's books. I obviously never read the books, but I don't think fans would be disappointed in the movie. It's like a Pixar movie, great for the children but a good film for the whole family.

My mom read me Paddington Bear growing up so I have known about him for a while (probably because my mom is a children's librarian).

That is why I wanted to see the movie but I thought maybe it would be too geared towards kids for me to enjoy. Now that I read your review I think I should see the movie!

Thanks for the info!

Thanks for the review. It sounds like a fun movie. Paddington Bear is the cutest thing.

I need to watch it!!
http://laviecestchic.blogspot.it

Haven't seen it yet. Sounds entertaining.

I used to read the Paddington Bear stories to my little sister when she was small. I went to the movie not expecting too much, but actually found bits of it quite surprising and touching. Good movie for kids and adults alike!

God God! I never knew that Nicole Kidman was in this movie!
I guess that living in that most backward of US states - Tennessee
has become an infliction on her brain cells!
Come home Nicole before you start "bible bashing" and
"Tea Party rubbish"!!!!!
Colin (Brisbane. Australia)

My daughter loves this one. I haven't seen it yet, but will probably catch it this summer.

I like watching children films too, although I am a grandma:)

I want se this movie, I heard is so good!!

I watch paddington movie last time with my brother. MOvie was awesome and I really enjoy the whole movie. I am big fan of animation movie. Now in this month January 2018. His second part gonna released. I am waiting for to watch Paddington 2 online. I heard about this movie from my friends and now I am excited to watch it.