I had heard about The Judge very recently and thought it looked promising. Even since the Iron Man/Avengers films, I usually try to see a movie with Robert Downey Jr. in it. I also heard Leighton Meester was also in the movie, as my wife Daisy really liked her as Blair Waldorf in the TV series Gossip Girl. So I figured she'd be excited to see Meester in this film. 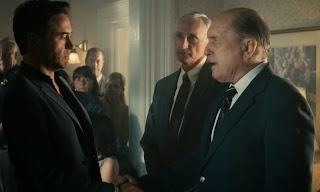 The movie is about a Chicago defense attorney named Hank Palmer. He's very good at his work, though he's been estranged from his family for many years. Hank and his father had a bitter falling-out, and he thought he'd never be back to Indiana again. His mother passes away unexpectedly, so he travels back home for the funeral. Both father and son try their best to hide their emotions towards each other. 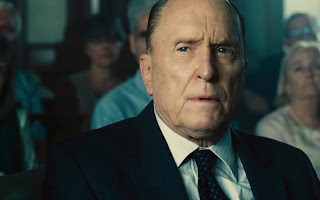 Hank can't stand his father for too long but right before he heads back to Chicago, something terrible happens. The police think his dad ran over a man on a bicycle with his car. His father has served as the local judge for many years, and being on trial for murder doesn't sound good for his legacy. Despite their differences, Hank decides to help his father stay out of prison. 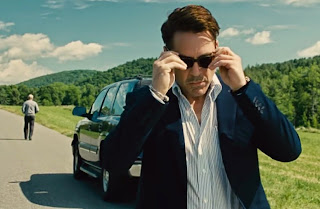 I had first thought The Judge had pretty good reviews with critics, but it didn't do as well as I had thought. I'm not surprised now though, as the movie has a good story but there's a lot of boring parts to it. You also never really care about any of the characters outside of Hank and his dad. I think Robert Downey Jr. is feeling the need to do more serious films after so many superhero movies, but this will probably be a movie everyone will forget about a decade from now.

Thanks for the review. I really wanted to see this movie from the previews but kind of forgot about it until now.

I saw it a few months ago in the theatre and thought it was okay. But RDJ needs to stretch himself as an actor more than he does. He always plays the same smart-ass, wisecracking, troubled but accomplished, kind of guy. His character was essentially Tony Stark without the Iron Man suit.

Coincidentally I went to see the new Avenger's move this morning with my son. I've always liked Robert Downey Jr and think he is an excellent actor. Thanks for the review on this movie. I would like to see it sometime.

I watched it awhile back and thought it was good but not great.

I forgot all about it, seems like I didn't forget much

I haven't seen this but I really like R.Downey. Too bad it wasn't a fantastic movie!


And Carl says thanks to you for the research, Adam

I'd never heard of this one! Sounds like I didn't miss much.