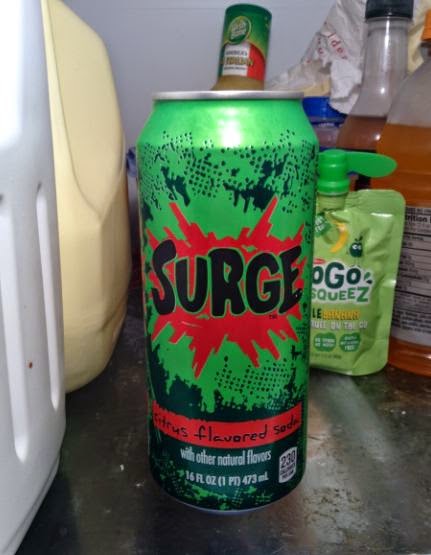 Surge first came to the United States in the 1990s as Coca-Cola's answer to Mountain Dew. By the mid-2000s, Mountain Dew was still around and Surge was a memory. Fans of the soda begged for it to come back and their wishes were granted. I thought I remember somewhat liking it back then, but I just re-tried Surge and I think it tastes like Mountain Dew/Mello Yello but rather sour.
Posted by Adam at 3:00 PM

Yikes. That's one scary looking can.

I have not tried Surge. I do like Mountain Dew and Spirt.

first I'm hearing about this one!

I've never heard of this soda. I've never been a huge fan of Mountain Dew or Mellow Yellow though.

I don't think I've ever heard of this one before, but I don't really drink soda so it's not surprising.

I've never heard of it.