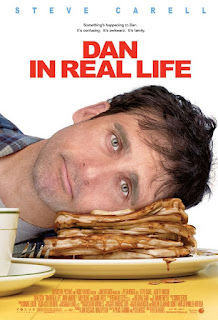 Back in 2007, I don't even remember Dan in Real Life coming out to theaters. While Steve Carell isn't exactly one of my favorite actors, I have liked him ever since he was on The Daily Show with Jon Stewart. I had heard about Dan in Real Life recently and figured it might be good. 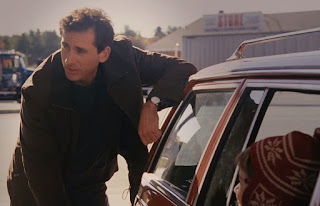 Carell plays Dan Burns who writes an advice column for a local newspaper. He's also a widower and father of three girls. The family is suppose to go to Dan's parent's house for a family reunion. However Dan's two oldest daughters either don't want to go, or complain about his parenting. 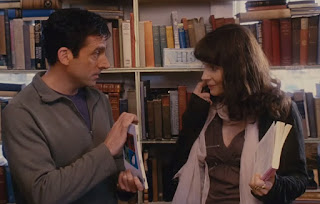 After they arrive, Dan goes alone to a local bookstore. There he connects with a woman named Marie, and the two realize how much they like each other. But Marie doesn't do much more than flirt, as she tells Dan she has a boyfriend. When Dan gets back to the family reunion, he sees Marie as she's his brother's girlfriend. But can the two deny their attraction during the several-day stay there? 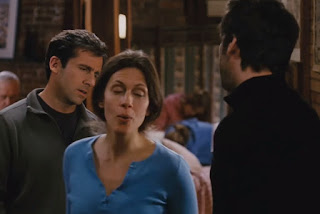 I thought Dan in Real Life was nothing more than decent. The story is unique I suppose, but I didn't like how Dan kept acting like a depressive idiot. It also features a lot of boring moments. While it wasn't a critical failure, I don't think many people will be remembering this one twenty years from now.

I think I do remember this one, and liked it!

I think I'll avoid it.

I saw it, and forgot it. I thought Steve was really good in Crazy Stupid Love.

I haven't seen it but I don't watch many comedies.

I haven't seen the movie...

I saw Dan in Real Life in theaters...I felt the woman was miscast. Is that just me? I don't know why...she just didn't seem to fit the role. I do remember being REALLY impressed with Steve Carrell's acting at the time because I'd only seen him in comedies before that.

Carell is one of them comedians that I don't get :)

Haven't seen that but sure sounds good!

I was quite bored with this one!