Fact of the Day: Flood War 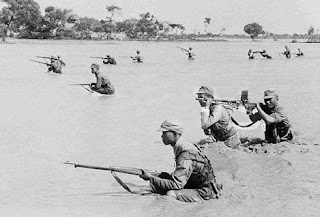 During the Second Sino-Japanese War (which was part of World War II), China had been losing badly to Japanese forces. In 1938, leaders in China flooded the Yellow River in hopes of stopping the Japanese army. While it had minor success in slowing the Japanese military, the flood was disastrous for years to come to those living around it. It was estimated that 500,000 to 900,000 Chinese citizens died because of it.
Posted by Adam at 12:00 AM

It is totally crazy what humans can do in war. Kisses:)

What countries do in war

So hard to understand why they couldn't see the damage it would cause.

What a horrible mistake to make!

The Chinese people have had unimaginable suffering inflicted on them for so many centuries, usually from their own rulers. I feel bad for them.

I do think Melisandre will do something about Jon. I agree with the theory that he will be coming back. I think he's playing a twist on words....Kit Harrington said he's not coming back as Jon Snow, but I think he's coming back as Jon Targaryen. He's a part of the prophecy so there's no way he's dead for good! I like that idea of him being burned to not become a walker. It makes sense that he has the same power as Daenerys.

They killed more of their own people than the enemy.