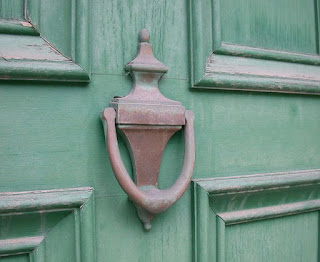 My dog Zelda has always been an inside dog, even when we let her outside she rushes back in when she's bored. But obviously she would need to go outside every-now and then. Typically we'd always open up the door to the back porch to let her out. She was not a dog that liked to wait, so she noticed when the old door could be pushed open with some force. So she'd run up to it and push it as hard she could with her paws, and run inside. We were able to deter her from doing it by pulling a kitchen drawer to block the door. A week or two later, she stopped trying to open the door herself.
Posted by Adam at 2:00 PM

Haha... my dog is an indoor dog too, but we do take him to the dog park and let him run free without leash!

It's not always easy to out-think a dog -- well done!

Awww what a clever pooch!! Love it.

That's fun and practical. I made my former dog a little door so he could go out and in as he pleased. Worked fine.

Smarter than a lot of people.

She is clever and funny!!

She is clever and funny!!

Zelda was a smart dog!

My female boxers learned how to put her paw on the sliding screen door to let herself back in. If only she'd learn to shut it again once she's in, that would be great! lol

I see that Zelda learns fast.