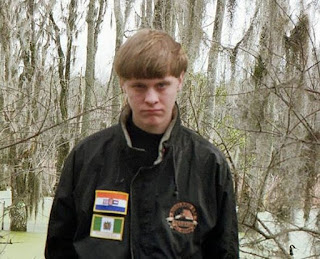 Most of America has already heard about Dylann Roof, an extremely racist young man who entered a church in Charleston, SC and murdered nine African-Americans. This happened in my home state (though I live on the other side of SC) and our Governor Nikki Haley has suggested (though she's not a judge) the death penalty for Roof. I heard her say something about that one person doesn't define South Carolina but sparing his life would show that we are better than him. I've seen many hate-filled and angry people like Roof in South Carolina, and calling for the end of his life makes us no better than this sad excuse for a human being.
Posted by Adam at 2:00 PM

It is awful, I haven't heard about this story. Probably because I haven't watched news show a few weeks already.

White supremacy is the real enemy here. Executing Root will only make him a martyr for the cause.

I can certainly understand that strong emotions produce reactions like this but the death penalty is not something I support.

No comment!
Except just look at your stupid gun access laws!
What about the 3 yr. old looking in his Mother's purse,
finds a gun and BANG - shoots himself?????

Ugly Racists with guns - black or white - will have
a field day when the idiotic mood decides or dictates!
I'm surprised this doesn't occur more often.
Unfortunately Debra is right - executing this "idiot" will make him a martyr.
So it's life imprisonment at tax-payers expense!!!

Amend your bloody laws and you'll have less of this business etc.
Colin

Life without parole.
Probably would be best if he was kept in solitary.
Because if he was in the General Population, he would get the death penalty.
Can't imagine, can't imagine such hate.

I'm not sure if a death penalty is right or wrong, but if there is one this crime would qualify for it.

Just looking at his face you can tell he is mean.

Just looking at his face you can tell he is mean.

I'm not sure how he wasn't locked up in some institution before this... just based on that face of his....