Lincoln Chafee is Running For President 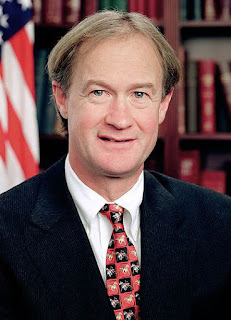 Lincoln Chafee might be one of the most interesting people in the race so far simply because of his history. He was a Republican for Rhode Island as a Senator to the U.S. Senate, an independent as Governor of Rhode Island, and now he's running for the Democratic nomination. While I like how he was a very liberal Republican, and helped bring marriage equality to the state of Rhode Island; I don't really see him getting the nomination. Though I wouldn't be shocked if someone like Hilary Clinton or Martin O' Malley picked Chafee as their running mate.
Posted by Adam at 12:00 AM

First I've heard of him running but what an interesting person.

he needs to change the tie.... so very not presidential :)

I think the phrase "Beware of Leopards that change their spots" might come
to play with this bloke.
Seems he can't really make up his mind on who he is or what he wants!!!
Colin (Brisbane. Australia)

I can never join in when it's about politics...I always feel like a Lone Wolf here so I'll just say HEY and hope you will have a great weekend.
xo to you and Daisy