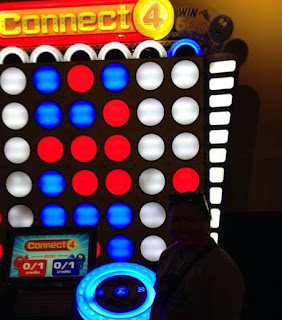 At the local pizza place Mr. Gatti's they have a little arcade, and they usually have some kind of deal of getting a card to use in the arcade that's not much more than the buffet alone. I had seen this one from far away when I would get carry out so I've been curious to give it a try. It's basically what'd you expect and it's been forever since I've played that board game. Who won? Me, to Daisy's disappointment.
Posted by Adam at 6:38 PM

Used to play that board game long time ago...maybe Daisy will win next time.

I used to play this as a board game with my kids. A lot of times I let them win.

LOL- Poor Daisy. If you like that you would probably love the board game Sequence. it is a favorite around here. xo Diana

I remember this game, I loved it!

I keep telling ya that you'd better let your lady win a few of these competitions.