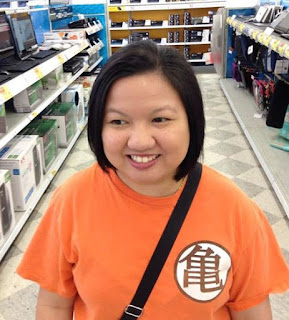 About one month after we were married, Daisy decided her hair was too long. So I dropped her off at the hair salon while I looked around at a nearby store. I never really realized that Daisy hasn't changed her hair much since the first five years I've known her. Her mom told her to get a "bob cut" and I mentioned that she should ask about different styles while she was there. I like her new haircut, especially since I don't like when she pulls her hair into a ponytail.
Posted by Adam at 9:06 PM

O, she looks adorable in the bob...bet it will be so easy to keep, too. She is so cute.

Very cute cut! And it'll be so much easier to take care of.

Great style! It suits her!

She had very pretty black hair. This new style is very becoming to her. She still looks happy. May she always be that way and you too.

looks lovely on her!

perfect for her, she is a beauty!!

I love it! I bet it will be so much more comfortable on her this summer too!

I think it looks great and it's so much more comfortable and easy to care for.