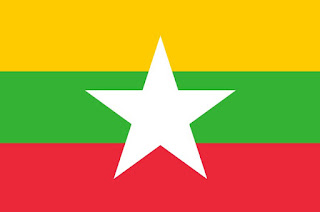 Myanmar (also known as Burma) has a sad history of military leaders ruling as dictators in the country. Their legislature rejected amendments that would have taken away some of the military's political power, and would have let Nobel laureate Aung San Suu Kyi seek the presidency. She currently can't because her sons hold British passports. This is not the first case of injustice against Aung San Suu Kyi as her party won a super-majority in 1990 only for it to be ignored by the military junta.
Posted by Adam at 8:00 PM

Tragic situation.
But improvements are slowly and I mean slowly evolving, so there
is a faint light at the end of the tunnel.
Colin (Brisbane. Australia)

Yes - WOW is right. I'd be surprised if anyone in the USA / Canada
has a clue where Myanmar (Burma) is located.
Colin